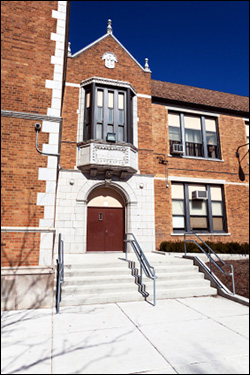 Located 9 Miles Southwest of The Loop.

West Elsdon is noted as a twin neighborhood of West Lawn. It has a population which includes a mix of Polish-Americans and Mexican-Americans. It has its own association, “West Elsdon Civic Association,” which privately organizes the neighborhood. St. Turibius grade school, a Roman Catholic elementary school, is located at 57th and Karlov.

Before the early 20th century, the area now designated West Elsdon was a marshy remnant of an ancient lake. The early settlers were German-Americans and Irish-Americans. During the 1930s, housing was built and Polish-Americans and other Eastern-Europeans settled the area. The land remained rural until World War II, when growth resumed and brick houses were built. Mexican-Americans settled in the eastern part of the community. Soon public schools were registering more Hispanic-Americans, and the CTA Orange Line was built to connect Midway Airport to Downtown.

Notice the north-south streets in West Elsdon start with the letter “K,” thus the neighborhood nickname, K-town. This is a vestige of a grand street-naming plan that was supposed to start with A at the state line and extend west, but resulted in little more than K through L. The Ks are 11 miles east of Indiana because K is the 11th letter in the alphabet.

51st Street CTA Orange Line train,  located half-a-block west of Pulaski Avenue on the north side of the West Elsdon neighborhood. Eastbound the Orange Line travels to the Loop, westbound to Midway Airport.  Many bus lines also serve the area.