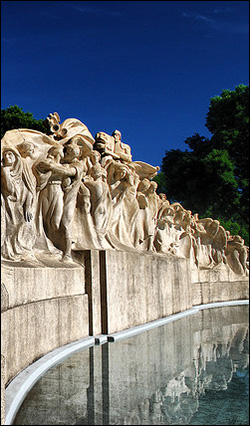 Washington Park gets its name from the and neighborhood. It includes the 372 acre park named Washington Park, stretching east-west from Cottage Grove Avenue to the Dan Ryan Expressway, and north-south from 63rd Street to 51st. It is home to the DuSable Museum of African American History. The park was the proposed site of the Olympic Stadium and the Olympic Aquatics Center in Chicago’s bid to host the 2016 Summer Olympics.

Including the park, the community area hosts two listings on the National Register of Historic Places. The Washington Park neighborhood has been the setting for works of popular literature. James T. Farrell’s Studs Lonigan trilogy is set in Washington Park. In Richard Wright’s novel Native Son, Bigger Thomas drives the drunken Jan Erlone and Mary Dalton around Washington Park, as the two embrace. In addition to hosting the DuSable Museum, the park hosts Fountain of Time, the world’s earliest concrete finished art work.

The play Raisin in the Sun was inspired by Lorraine Hansberry’s time in the neighborhood after her father won the repeal of restrictive covenants. The Hansberry house, the red brick three-flat at 6140 S. Rhodes which they bought in 1937, is up for landmark status before the Chicago City Council’s Committee on Historical Landmarks Preservation