Nearly 14 months after the Wabash Lights beta installation was first powered on, the row of colorful LED tubes that have hung beneath the Loop’s elevated train tracks on Wabash Avenue will be coming down this week. According to Wabash Lights creators Jack Newell and Seth Unger, the team has finished testing the lighting installation and are ready to make their final push for what will eventually be the final product.

“We believe that the beta installation has been up long enough to learn everything we wanted to learn,” Newell explains. Since the beta installation went up in early 2016, the team has had to send some of the LED lights back to Philips for continued testing and replacement, but Newell and Unger say that they are at the “end of that chapter.” The LED lights have had to weather Chicago’s extreme elements and the constant vibration of passing overhead trains, but the team says that the failure rate of the lighting modules decreased over the course of the beta test.

However, the next challenge is not so much a technical one, but instead, it’ll be focused on raising funds to see the final project installed. Newell and Unger are currently seeking half a million dollars by the end of 2017 to move on to the installation of the Wabash Lights. The team has also tweaked the scope of the project, choosing to move ahead in phases versus trying to fundraise for the entire four-block installation. Unger and Newell say that $500,000 will be enough to affix the interactive lighting installation to a block’s length of ‘L’ tracks. 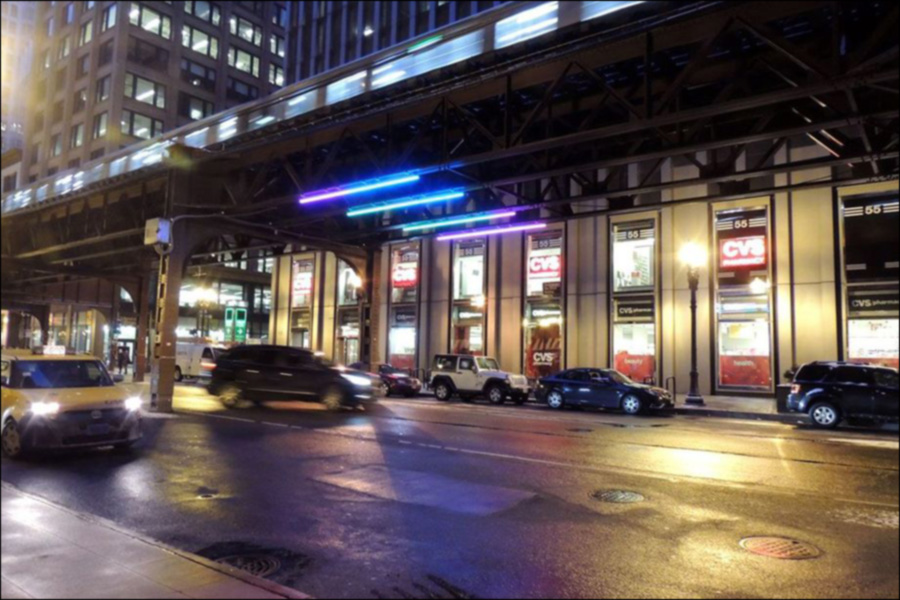 “We’ve been able to reduce the cost by 35-40% per block,” Unger suggests. And while the team is reaching out to corporate partners and other private funders, they are once again reaching back out to the public to help with fundraising. For $750, backers can “own” one of the four-foot lights that will go up during the final install. Those on a tighter budget can own one of the installation’s 24,000 pixels for $75.

Unger and Newell say that they are continuing to work with DePaul University’s College of Computing and Digital Media on the interactive component. DePaul students have been helping with the Wabash Lights team on the installation’s app, which allows users to control and modify the colors and LED modules from mobile devices.

While the team says that they still would like to ultimately see the finished project span four, or possibly even eight blocks, the length and scope of the installation is contingent on funds raised. Unger and Newell say that they plan to start with the block of Wabash between Madison and Monroe for the first phase and will expand from there. The team say that this location is important as it will connect the public art installation with the under-construction Washington and Wabash “superstation.”