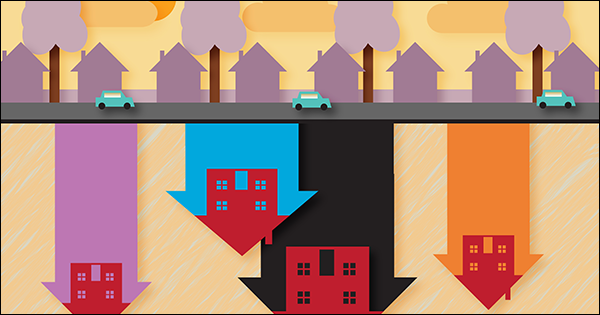 National home values fell in October from September, according to the October Zillow Real Estate Market Reports, the second month in a row of falling home values and the first consecutive monthly declines since the market hit bottom in October 2011. The U.S. Zillow Home Value Index was $162,800 in October, down 0.1 percent from September.

Home values nationwide rose 5.2 percent year-over-year, a much slower pace than annual appreciation rates in the 7 percent range experienced over the summer, and further proof that the market has begun to cool off after months of unsustainable appreciation. For the 12-month period from October 2013 to October 2014, national home values are expected to rise just 2.7 percent, roughly half the current pace, according to the Zillow Home Value Forecast. Seven of the top 30 metros covered by Zillow are expected to see home values fall over the next year, with the biggest declines in St. Louis (-1.5 percent), Philadelphia (-0.9 percent) and New York (-0.7 percent).

“The months-long period of annual home value appreciation rates in the 6 and 7 percent range was great while it lasted, but we knew it would not continue indefinitely. The slowdown we’ve seen these past few months was expected and is largely welcome news for a market still struggling to find its natural balance,” said Zillow Chief Economist Dr. Stan Humphries.  “The conditions that led to the robust appreciation experienced earlier this year, including historically low mortgage interest rates, high affordability, low inventory and high demand, are waning. In their place, we’re beginning to see more inventory and rising mortgage rates, which will lead to further normalization in the market going forward.”

National rents rose in October from September, up 0.2 percent to a Zillow Rent Index of $1,300. Year-over-year, national rents were up 2.3 percent in October.

Mortgage Rules Changes Are Coming in 2014
Scroll to top