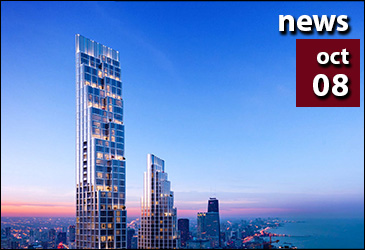 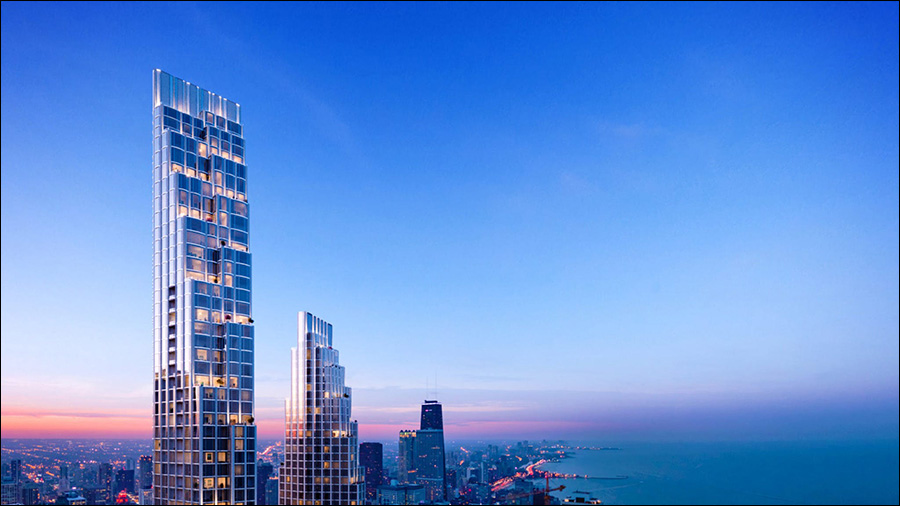 As the birthplace of the skyscraper and home to one of the world’s greatest skylines, Chicago is reinventing itself with new batch of very tall, high-profile towers.

While Chicago hasn’t completed an 800-footer since 2010, that’s about to change and in a big way. Three projects exceeding that mark are already under construction with more patiently waiting in the wings.

And with big name designers like Jahn, Viñoly, Stern, Pelli, Gang, Childs, Smith, and Gill on board, the newest generation of tall towers is raising the bar both literally and architecturally.

Here’s a look at new class of skyscrapers that will redefine Chicago’s iconic skyline. Under construction projects are listed first followed by green-lit and finally still-pending proposals.

Currently rising along the south bank of the Chicago River’s main branch, the 1,198-foot Vista Tower is posed to become the city’s third tallest building. It’s angular design from Chicago architect firm Studio Gang is made up of three stacks of undulating geometric frustums wrapped in alternating bands of shaded of glass.

Work progressed quickly after Vista broke ground in 2016 and recently reached the halfway mark. Delivery of its 406 luxury condos, a 192-room five-star hotel, and impressive amenities is expected in 2020.

Formerly known as One Grant Park, this 76-story tower is climbing skyward at the southern edge of Chicago’s skyline at the corner of Roosevelt and Indiana and brings some serious height to the South Loop. Developed by Crescent Heights and designed by Rafael Viñoly Architects with a nod to the Willis Tower’s “bundled tube” layout, the 800-unit luxury rental tower broke ground in early 2017.

Expected to rise 893 feet, NEMA Chicago comes up a little short of the official supertall definition set by the Council on Tall Buildings and Urban Habitat. That being said, the project’s second phase does call for a taller twin tower which may exceed the magic 984-foot threshold.

After breaking ground in Chicago’s Streeterville neighborhood in 2016, the 70-story One Bennett Park project recently reached its final height of 836 feet. Developer Related Midwest selected New York’s Robert A.M. Stern Architects to design the neo-Art Deco style building. While the majority of the building’s 350 total units will be a high-end rental apartments, the top floors of One Bennet Park will contain 69 for-sale luxury condos.

The high-rise will be joined by a new park from Michael Van Valkenburgh Associates, the firm that designed Chicago’s Maggie Daley and 606 trail. The tower and the planned green space get their name from architect Edward H. Bennett who co-authored the influential 1909 Plan of Chicago with famed urban planner Daniel Burnham. The skyscraper is on track for an early 2019 opening.

Though residential developments dominate this list, at least one purely commercial project is looking to leave its mark on the Chicago skyline. Known by its address of 110 N. Wacker, this upcoming Bank of America-anchored office tower is approved to soar 800 feet along the Chicago River. Designed by Goettsch Partners, it features a 45-foot-wide riverwalk, public pocket park, soaring lobby and a serrated western facade to maximize water views.

Now under construction, the high-rise replaces the low-rise General Growth building. In an usual move, a federal historic review of the old midcentury structure prompted a last-minute compromise to save incorporate panels from its metal facade into the new tower’s riverwalk space.

Proposed to replace a block-sized parking lot across from Chicago’s Holy Name Cathedral at the corner of State Street and Chicago Avenue, this mixed-use project from JDL Development calls for a pair of towers rising 49 and 76 stories atop a shared podium. The taller of the duo will officially top out at 1,011 feet.

One Chicago Square is a design collaboration between Chicago-based Goettsch Partners and Hartshorne Plunkard Architecture. It will contain a grocery store, high-end heath club, restaurant, commercial offices, 1,090 parking spaces, and a mix of 869 rental and condo units.

The River North supertall was approved by the Chicago Plan Commission in January. The project is hoping to break ground as early as this year and open some time in 2021.

This Helmut Jahn-created condo building at 1000 S. Michigan Avenue will make a sizable impact on Chicago’s southern skyline when it eventually soars 832-feet over Grant Park. The glassy skyscraper will replace a surface parking lot with 323 luxury condominiums with interiors designed by Kara Mann.

Project developers Time Equities, Oaks Capital, and JK Equities are currently pre-sales mode and have listed a number of units including a South Loop record-shattering $8.1 million penthouse. Provided sales go well, 1000M could break ground later this year ahead of an anticipated 2022 completion.

First unveiled to the public in 2015 as an 86-story supertall comprised of offset cantilevered boxes, the design was shorted during the city approval process and redrawn into a curvy, 74-story tower seen above.

At 1,422 feet, this proposed addition to Chicago’s neo-gothic Tribune Tower is gunning for the title of Chicago’s second tallest building. Slated to replace a parking lot just east of its historic neighbor, the yet-to-be-named skyscraper will contain a 200-key luxury hotel, 439 rental apartments, 125 condominiums, and 430 parking spaces.

The design from hometown architecture firm of Adrian Smith + Gordon Gill is quite slender by Chicago standards—partly due to a protected view corridor requiring Tribune Tower to remain visible from the Ogden Slip to the east.

While co-developers CIM Group and Golub & Co. seek approval for their new supertall, the duo are moving ahead with a conversion of the 1925 Tribune office building into luxury condominiums.

After years of rumors and speculation, Related Midwest unveiled its plan for the waterfront site of the failed 2,000-foot Chicago Spire in in May. The latest plan for the high-profile parcel includes a pair of stepped towers rising atop a shared podium.

The Streeterville project will require city approval. If all goes smoothly, Related Midwest aims to simultaneously break ground on both towers in the summer of 2019 and deliver 400 N. Lake Shore Drive in 2023.

This 80-story tower slated for “Site I” in Lakeshore East’s alphabetical masterplan would rise at the opposite side of the mouth of the Chicago River across from 400 N. Lake Shore Drive. If approved in its current form, the bKL-designed residential tower wold reach 875 feet.

This proposed tower will be the tallest of three new towers slated for Wolf Point at the junction of the Chicago River’s North, South, and Main branches. Tentatively zoned to rise 950 feet—a level just shy of the supertall mark—the South Tower is still subject to future design tweaks and could see its height grow.

This final phase of the Wolf Point project is unlikely to begin work until the eastern tower is complete in late 2019. It will also require a trip back before the City of Chicago to receive final approval.

While its height of “only” 680 feet puts it below roughly two dozen other Chicago towers, the building slated for 725 W. Randolph Street is bid deal given its location. As proposed, the Fulton Market project will easy become the city’s tallest structure west of the Kennedy Expressway.

The architectural design from Connecticut-based Roger Ferris + Partners positions the upper portion of the tower on an angle and features an repeating exterior grid of steel, aluminum, and glass. Inside, the development would contain 370 rental apartments, an Equinox fitness club, and a 165-room Equinox-branded hotel.

The project has yet to get the nod from city officials. If it manages to move forward without a West Loop “neighborhood haircut”, 725 W. Randolph will create a new western peak on Chicago’s skyline.

Wanted: The Chicago bungalow for the 21st century

The latest thing in downtown rentals: Townhouses
Scroll to top