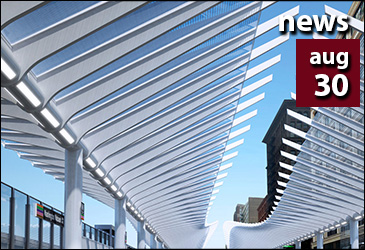 Next week, the $75 million Washington-Wabash ‘L’ station will make its grand debut in the heart of the Loop. Starting August 31, the new station will officially be open to the public. Having been under construction for nearly three years, the contemporary station replaces the former stops at Madison-Wabash and Randolph-Wabash under one roof as a new Loop superstation.

With a central location in the Loop, the station will service the Brown, Purple, Orange, Green and Pink lines. According to city officials, the construction project has been financed entirely with federal Congestion Mitigation and Air Quality (CMAQ) funds and will feature recycled materials, new LED lighting, and will also meet ADA compliance.

The station is already turning heads with its striking contemporary design and skeletal canopy that is reminiscent of the work of Santiago Calatrava, the star architect behind the new World Trade Center transit hub in New York. However, the design for the new Washington-Wabash comes from engineering and design outfit EXP—a firm that announced its move from its Toronto headquarters to Chicago back in February.

Once opened, the new station will be a become a major hub along the CTA’s rail system. The transit agency estimates that the Washington-Wabash station will see roughly 13,000 riders per day, making it one of the busiest stations in the system.

Chicago Labor Day Weekend 2017: What to Do
Scroll to top