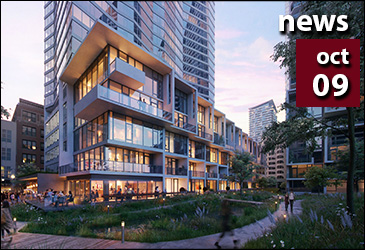 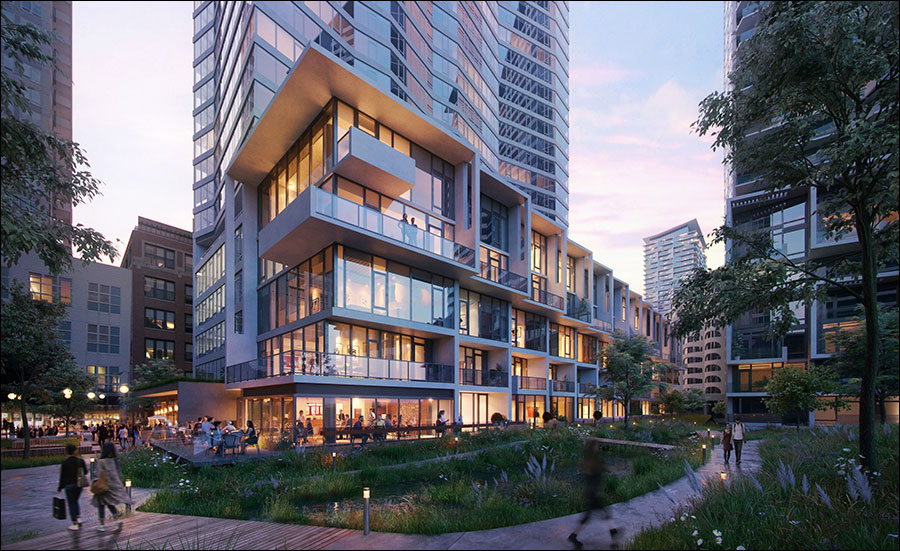 Townhouses fill the lower floors of the 29-story Cooper at Southbank.

While townhouses are nothing new, developers haven’t often built them as rentals. Until now. There are four townhouse-for-rent projects underway or recently completed, in the Gold Coast, the South Loop and River West.

“With the influx of people coming to downtown Chicago for jobs or any number of reasons, a townhouse may be a good landing place for them for a couple of years,” said Tom Weeks, executive general manager at Lendlease in Chicago, the firm delivering the largest single batch of rental townhouses, 26. They’re at the base of the Cooper, a 29-story apartment tower that is the first building completed at Southbank, a development on the east bank of the Chicago River’s South Branch between Harrison and Polk streets.

For the tenants, renting a townhouse provides other advantages, representatives of the four projects say: It’s a flexible way to test a neighborhood for a while before buying; and renting appeals to people who may need a place temporarily while they build a new home or go through a divorce or other life transition.

Another reason: “Some people just don’t want to deal with the politics of a homeowners association in a condo building, or property taxes and the other details of homeownership, but they like living in a house,” said Mike Lojas, director of marketing and leasing at Draper & Kramer, the firm developing 61 Banks Street, a rental building on Lake Shore Drive whose street level is lined with eight rental townhouses.

There are at least three other new residential projects that include rental townhouses: Spoke, a 363-apartment tower completed in May at Morgan Street and Milwaukee Avenue in River West, has three rental townhouses at street level on its Morgan Street side. Chestnut Row is a group of seven townhouses on Chestnut Street near Washington Square Park on the Gold Coast, scheduled for completion in November. And 61 Banks, an eight-story, 58-unit building at Lake Shore Drive and Banks Street, is scheduled for completion in April.

In all, that’s 44 rental townhouses coming to market in the course of a year, a puddle compared to the tens of thousands of new apartments flooding downtown neighborhoods but a test of a new style of rental.

These are luxury-level rentals, with prices starting at around $7,000 a month at both the Cooper and Spoke, three-bedrooms starting at $10,800 at 61 Banks, and $13,500 to $15,000 a month at Chestnut Row. Most of the projects are not yet open for leasing or just started. At the earliest out of the gate, Spoke, two of the three townhouses that are built are not yet rented.

The projects’ representatives all say they’re confident there’s a market for rental townhouses.

“People want the freedom not to have a long-term commitment,” said Claudia Najera, a leasing executive at Tawani Enterprises, which is developing the Chestnut Row group. The standard lease there is two years. “They don’t have to think about maintenance or any of that, especially if they travel a lot. It’s stress-free.”

Opening next week, the Cooper has 452 rental units in all, the great majority of them traditional one-level apartments. The 26 townhouses, Weeks said, give potential renters “another option, to live on multiple floors more like a house, and to be able to walk out directly at ground level.”

The latter is pivotal at Southbank, which is one of two large projects taking advantage of the open river frontage on the South Branch, with plans to include a riverwalk, kayak launches and other waterfront amenities.

“People with dogs, people with kayaks, people who want to have direct access out to the open space and the river” may find renting a townhouse appealing, Weeks said.

For the developer, townhouses can serve a practical purpose whether for sale or rent: They hide the multiple levels of parking an apartment tower needs. That’s true for two of the current projects, the Cooper and Spoke. (Parking is below ground at the Banks project, and on Chestnut Street it’s behind the L formed by the townhouses.)

“It’s an aesthetic solution,” said Rob Bond, president of Bond Cos., the firm that developed Spoke. While the Milwaukee Avenue side of the building is a commercial district, on the Morgan Street side it’s more residential, and “people don’t want to look at an eyesore parking garage on their street,” Bond said.

Covering the garage was a requirement of zoning, and the townhouse plan met those requirements, he said.