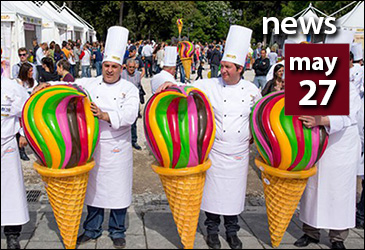 If you can brave the thunderstorms, there’s plenty of happenings to fill the three-day holiday weekend. Here’s what we recommend:

Fri 5/27-Sun 5/29: The Gelato World Tour comes to Chicago with 16 flavors crafted by some of the best gelato artisans, and guests can vote for their favorite in Millennium Park (Michigan and Monroe). Finalists from the competition will go on to compete against other artisans from around the world, so this is sort of a big deal. Noon

Rishika Murthy and the rest of Simmer Brown celebrate a year of their stand-up showcase on Sat 5/28.

Sat 5/28-Sun 5/29: The Belmont-Sheffield Music Festival (which predictably takes place at the corner of Sheffield and Belmont), kicks off the summer street festival season with a music lineup that includes School of Rock Chicago, Catfight, and more. Noon

Cars get the boot for Bike the Drive on Lake Shore Drive.

Sun 5/29: Wear your best Tommy Bahama shirt, pour a drink into a pineapple, and get to Logan Square (2595 N. Milwaukee) for Aloha (A Vigil), the celebration-turned-wake for the recently removed Alohabillboard that, for nearly a year, advertised the Cameron Crowe stinker at the corner of Milwaukee and Logan. 2 PM

Mon 5/30: Celebrating Civil War General John A. Logan’s pledge of remembrance on the first Memorial Day in 1868, and commemorating the 1996 rededication of the monument to him in Grant Park (Columbus and Jackson), the Chicago Cultural Mile Association hosts the annual ceremony and dedication of the Logan Monument. 11 AM

Mon 5/30: Death metal band Grave Miasma hit up Reggie’s (2105 S. State) for their Chicago debut. Philip Montoro writes, “The riffs are clear and memorable, at least by the standards of their subgenre—though the twin guitars constantly knot and unravel, they don’t congeal into a shapeless Lovecraftian morass, instead moving stepwise as crisply as the arc from a Tesla coil.” 8 PM