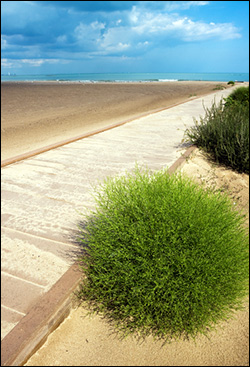 The jewel of the neighborhood is the South Shore Cultural Center, previously The South Shore Country Club, which began as a lakefront retreat for the wealthiest of Chicago’s movers and shakers. The firm of Marshall and Fox, architects of the Drake, Blackstone, and Edgewater Beach Hotels, were hired to design an opulent, Mediterranean-style clubhouse for a membership that included some of Chicago’s most prominent families. The grounds provided private stables and members-only beach, and golf course. Tennis, horseback riding, and skeet shooting were enjoyed by guests the likes ofJean Harlow, Will Rogers, and Amelia Earhart. Between the first and second World Wars, a housing boom brought a development of luxury cooperative apartments and mansions to the neighborhood surrounding the club. In 1974 the club held its last members-only event. Today, the Chicago Park District owns the property. It has been restored to its original design and is now open to the public. A major drawback to the South Shore and neighboring South Chicago neighborhoods is that they are one of the few remaining Chicago lakefront neighborhoods that lacks a fully publicly accessible neighborhood shoreline. There are lakefront gaps between the existing South Shore Cultural Center and Rainbow beach to its south. Even larger masses of lakefront land along the South Chicago neighborhood (at the abandoned USX Steel Mill) with their beautiful vistas of the city Lakefront and Chicago skyline are currently restricted to the public and not available for recreational enjoyment by the adjacent neighborhood residents. Presently, Chicago Lakeside Development proposed plans call for the completion of this southern portion of lakefront with the development of new parklands, beaches, and a continuous waterfront bicycle and jogging path that will link Calumet Park and Beach in the East Side neighborhood to the South Shore Cultural Center in South Shore. Completion of such a project would result in improved access to Chicago’s southern Lakefront and connect it neighborhoods such as Hyde Park and Bronzeville to the north.