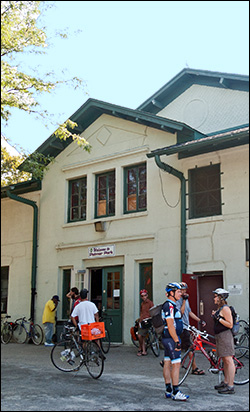 Roseland was settled in the 1840s by Dutch immigrants, who called the area “de Hooge Prairie”, the High Prairie, because it was built on higher, drier ground than the earlier Dutch settlement several miles further south of the Little Calumet River, which was called “de Laage Prairie”, the Low Prairie, now South Holland, Illinois.

The community was entirely agrarian until the late 19th century, when the town of Pullman, Chicago was built between Roseland and Lake Calumet. George M. Pullman planned a model industrial city built around a factory that manufactured his “Palace” railway coaches. Modern brick homes were built with electricity, plumbing and gas utilities. Skilled tradesmen from all over Europe immigrated to the town of Pullman with many settling in nearby Roseland. Roseland was annexed into Chicago in 1892.

The Roseland area became a very cosmopolitan community made up of multi cultural, ethnic and racial backgrounds. There was large population of Italian Americans just east of Roseland in the Kensington community. Most came to the area from the Little Italy neighborhood on Taylor Street making Kensington the center of South Side Italian life. San Antonia de Padua (St. Anthony’s) cathedral was a cultural landmark of the area. Supporting businesses flourished rapidly changing the farmland into commercial and residential communities surrounded by a number of industries. Stores on Michigan Avenue served the entire south side of Chicago.

Fortunes began to change in the 1960s when industry patterns lead to economic decline. Steel mills to the east were shuttered. Pullman scaled back production and eventually closed for good in 1981. The huge Sherwin-Williams paint factory closed for good in 1995. A period of rapid ethnic succession took place. Skyrocketing crime rates, gang violence, racial tension and urban decay forced longtime residents and businesses to flee, a phenomenon referred to as white flight. Some new residents purchased homes with federal subsidies and FHA backed mortgages and by the mid-1980s Roseland had one of the highest HUD repossession rates in the city. In the mid-1990s, Roseland gained notoriety as the stomping ground of Robert “Yummy” Sandifer, the child who was executed by his gang at age eleven. Much needed economic and social revival remains elusive.

Roseland has yet to recover from the economic decline and gang violence. Community leaders and residents are attempting to restore the community through programs like Kids off the Block.

The Metra Electric Line runs along the east edge of Roseland and offers stops at 107th and 11th streets. Many bus lines server the area, and the 95th/Dan Ryan station os a short walk from Roseland.