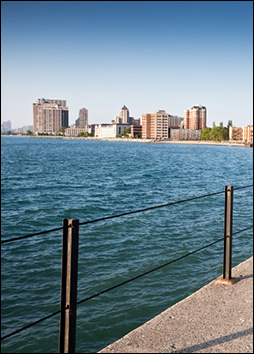 Rogers Park is located ten miles north of the Cook County Courthouse in downtown Chicago. It is bounded by the city of Evanston along Juneway Terrace and Howard Street to the north, Ridge Boulevard to the west, Devon Avenue and the Edgewater neighborhood to the south, and Lake Michigan to the east. The neighborhood just to the west, West Ridge, was part of Rogers Park until the 1890s.

For decades, most of the neighborhood has been within the 49th Ward of the city of Chicago, but that was a misconception. The ward covered much of Edgewater and went as far south as Hollywood in the 1960s, while the 50th Ward extended east to Ashland Avenue. But, because redistricting, a part of Rogers Park is now within the 40th Ward, and the 49th Ward now encompasses part of West Rogers Park.

The Rogers Park area was developed on what once was the convergence of two Native American trails, now known as Rogers Avenue and Ridge Boulevard, predating modern metropolitan Chicago. The Pottawatomi and various other regional tribes often settled in Rogers Park from season to season. The name of Indian Boundary Park west of Rogers Park reflects this history as does Pottawattomie Park near Clark Street and Rogers Avenue.

One of the original settlers of the area was Phillip Rogers, who operated a toll gate beside his home at what is now Ridge and Lunt Avenues and often traded and worked with the local tribes. During the period 1844 to 1850 arriving settlers started farms along a ridge in the western portion of Rogers Park, avoiding the often flooded lowlands to the east. In 1870 Rogers’ son-in-law, Patrick I. Touhy, sold 100 acres to land speculators. With an additional purchase of 125 acres in 1873 these speculators together with Touhy formed the Rogers Park Building and Land Company. Also in 1873, the Chicago & Northwestern Railway completed a service line through the area and constructed a station at Greenleaf Ave. The population was 200 and a Post Office was opened in July 1873. Five years later, the voters agree to incorporate as a village under the name of Rogers Park.

On April 29, 1878 Rogers Park was incorporated as a village of Illinois governed by six trustees. In 1885, the Chicago, Evanston & Lake Superior Railroad, a predecessor of the Chicago, Milwaukee & St. Paul Railroad, built a combination freight and commuter line through eastern Rogers Park on the present “L” right-of-way with a stop at Morse Avenue. By 1893, the population was 3500, the North Shore Electric Railroad expanded its service into the area, and the village of Rogers Park was annexed to Chicago.The Rogers Park Women’s Club opened the first library in 1894.

By 1904 the population had grown to 7,500. The NorthWestern elevated line was extended from Wilson (4600N) to Howard Street. The Jesuits opened Loyola U in 1909. Successive generations brought about vast cultural changes to the former village. By 1930 the population was 57,094 making Rogers Park one of the most densely populated areas in Chicago. Elite Chicagoans began to move to new planned communities in the north suburbs by the 1930s, which ushered in the migration of German, English, Irish, and Jewish families to Rogers Park. With the devastation in Europe following World War II, many additional immigrants found their way to Chicago and the Rogers Park neighborhood. A growing and vibrant Hispanic community has recently grown along Clark Street since 2000.

Like other parts of the US, the financial crisis of 2007-2009 hit the area hard, and many recently converted condominiums went into foreclosure.

Rogers Park has a higher rate of residents with Master’s, Professional, and Doctorate degrees than the state average. In addition, the rate of residents that work for non-for-profit institutions is almost twice as high as the state average. The dominant educational institution in Rogers Park is Loyola University Chicago. Historic places of interest include Madonna Della Strada Chapel, the mother church of the Jesuit Province of Chicago. The neighborhood continues to be home to many Jesuit religious-order institutions. However, modern Rogers Park contains many different religious institutions. An example of the neighborhood’s diversity is the historic Rogers Park Baptist Church. Founded in 1891, this church has services in three languages every Sunday and is made up of immigrants from 21 countries representing five continents.
The presence of its diverse array of students and academics from Loyola University Chicago and Northwestern University, just a few miles to the north, has historically lent Rogers Park a high degree of liberalism and tolerance. The community also has a high Internet presence. In 2007, the Web site outside.in named Rogers Park one of the country’s “bloggiest neighborhoods.”

The predominant single-family housing stock in Rogers Park is the typical Chicago bungalow.The Artists of the Wall festival at Farwell Avenue pier has been held for over twenty years, the longest event of its kind in Chicago’s history.

The Red and Purple lines follow the same route all the way to Howard Street, passing Loyola, Morse, and Jarvis on the way. #147 bus along Sheridan Road. makes for a quick trip to the Loop.