Riverwalk 2017 off and running 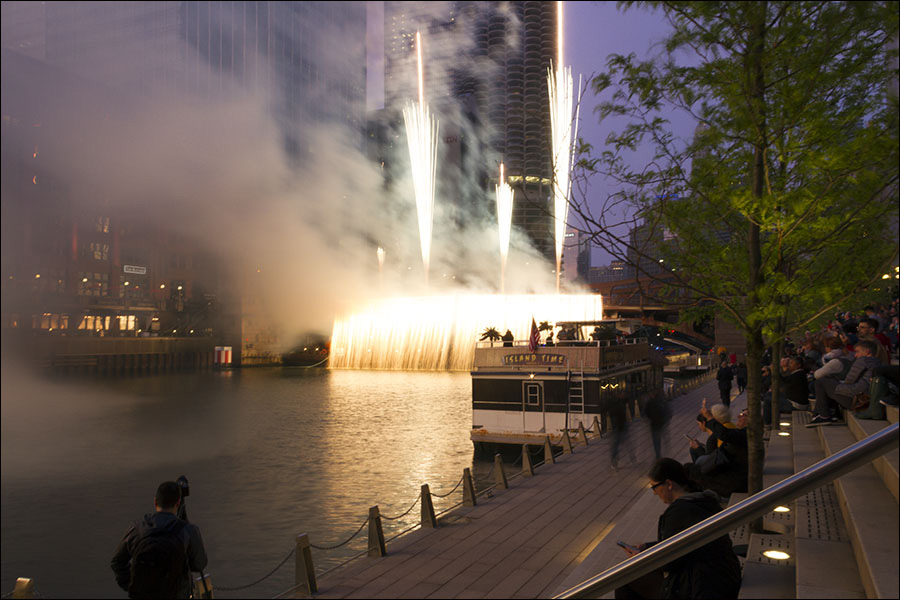 Delayed about 20 minutes by hope for better weather, fireworks launch from the east side of the Clark Street Bridge Saturday evening for a crowd at right that included Mayor Emanuel. The one-minute-long grand finale “pyrotechnic waterfall” was also performed on the west side of the LaSalle Street Bridge. Photos by Steven Dahlman except where noted.

Rain did not keep Riverwalk vendors from opening, nor fish puppets from parading. While most Riverwalk vendors have been operating for weeks, at least on sunny days, May 20 was the day the city declared the Riverwalk open for business.

The offerings were arguably modest, as were crowd levels that started small but picked up as the weather improved.

At a dedication event on the Riverwalk west of Wells Street late Saturday morning, Mayor Rahm Emanuel said that over the next few months, as part of a city-wide public art campaign, artwork, sculptures, and light shows on buildings will appear along the Riverwalk. The 50×50 Neighborhood Arts Project, announced last October, will provide as much as $1 million for new public art projects throughout the city.

The money comes from funds all 50 aldermen have at their disposal to spend on public art in their wards, and what they each spend will be matched, up to $10,000, by the city’s Department of Cultural Affairs and Special Events. 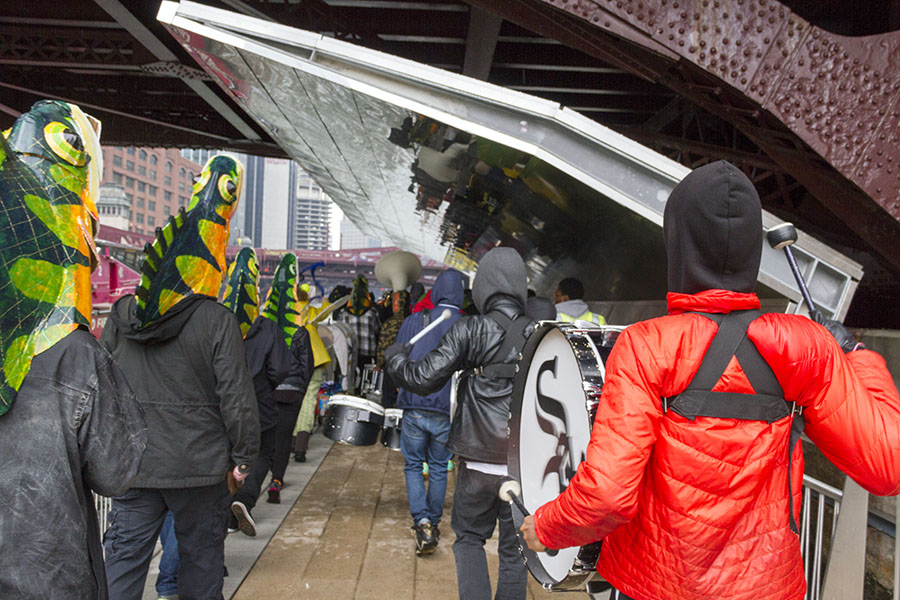 (Above) Fish puppets from Art Side Out Studio & Mask Shop march along the Chicago Riverwalk on Saturday, along with King College Prep Marching Band, shortly after the Riverwalk was officially opened by Mayor Emanuel

Mayor: Riverfront is city’s ‘back yard’

Emanuel says Chicago is “way ahead” of other cities – on the Great Lakes and throughout the world – trying to remove industry from their waterfronts and make them urban parks.

“The City of Chicago, with this Riverwalk…has really created another, second waterfront,” said Emanuel. “We are unique as a city, with two different waterfronts, [Lake Michigan] obviously our front door and now [the Riverwalk is] what I call our back yard into our neighborhoods and communities that unite the city both to the north and south.” 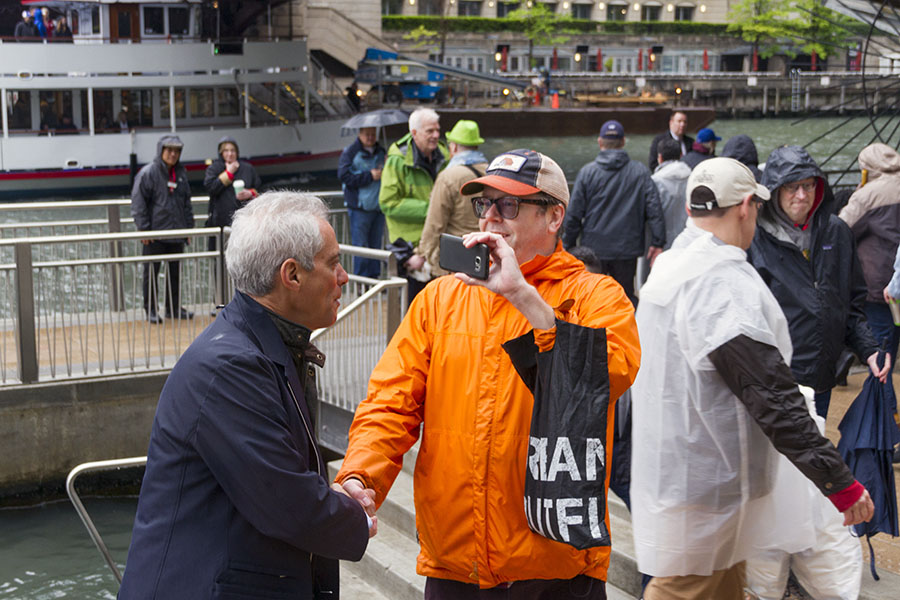 “Let’s be honest. In San Antonio, they have a creek. Here in Chicago, we have a river,” mused Emanuel, pointing to the Chicago River. “This is what a river looks like.”

The comment, published nearly four weeks later by Loop North News, was read by a television station in San Antonio and eventually The Dallas Morning News, which defended the River Walk in an editorial on May 12.

“This aggression will not stand,” read the editorial, most likely tongue-in-cheek. “The San Antonio River Walk is where you go when your shopping list consists of a Don’t Mess with Texas shot glass, a Spurs jersey, and a coonskin cap.” 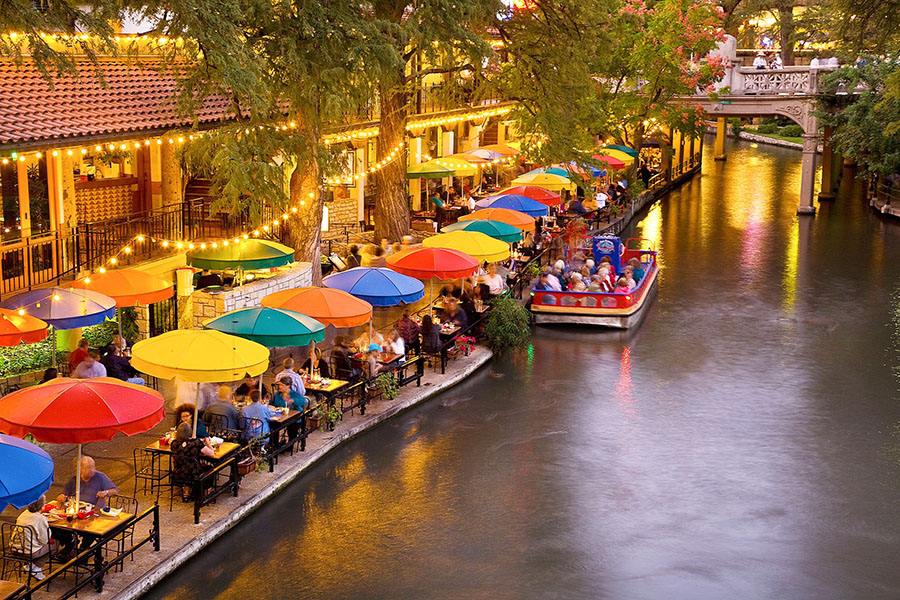 Like the Chicago Riverwalk, the San Antonio River Walk (above) runs one story beneath city streets and is lined with bars, restaurants, and other attractions. It is twice as long as Chicago’s 1.25-mile walkway from Lake Shore Drive to Lake Street.Image obtained from VisitSanAntonio.com

But evenings on the River Walk, said the newspaper, bring back fond memories for Texans.

“The warmth of the Spanish architecture and the ease of conversation with other travelers remind us of childhood vacations and school field trips. Dancing under the stars on a one-too-many-margaritas night, hearing tall tales of long-ago river barge drivers racing their boats until dawn, watching people from all over the world enjoy our river – it all brings back the feeling that good luck and health and beauty and Texas will last forever.”

Theater on the Lake renovation set to begin

FOR LEASE: Extra-Wide 2500 sq. ft. Townhouse in the Heart of the City
Scroll to top