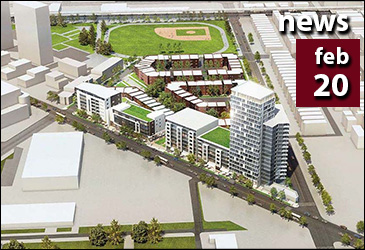 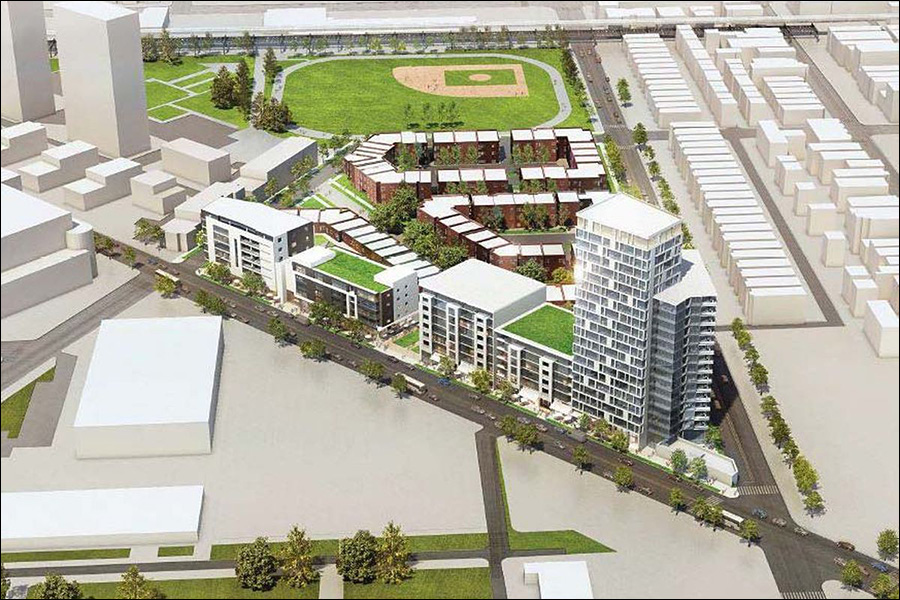 Previously part of the sprawling Cabrini Green public housing project, a vacant 10-acre parcel at the corner of Clybourn Avenue and Larrabee Street may soon give way to a mixed-use development featuring a glassy high-rise, hundreds of mixed-income residences, and new public green space.

A rendering from master planner Gensler Chicago provides a first look at what is being considered for the site once occupied by the Near North Career Metropolitan High School until 2001. The image appeared in the design firm’s bi-annual Dialogue magazine.

The complex will be anchored by a 21-story residential tower at the southeast edge of the site, next to the single-story Clybourn Medical Center building on the corner which is not included within the redevelopment boundaries.

The high-rise will be joined by several mid-rise structures and low-rise townhomes. Combined, they include 183 units for Chicago Housing Authority (CHA) tenants, 82 units as affordable housing, and 217 market-rate residences.

The new buildings will be bridged by a pedestrian connection lined with small parks and playlots. The plan also calls for 36,000 square feet of new retail space—a prospect bolstered by the success of the nearby Target store and the New City mixed-use development.

Texas-based Hunt Development Group was selected from a list of five prospective bidders to lead the Clybourn and Larrabee project one year ago. Hunt will partner with local developers Imagine Group and Chicago Neighborhood Initiatives. According to earlier reports, work could begin before the end of this year.

The project covers just a portion of the 40 acres of increasingly valuable Cabrini Green land that the CHA is looking to redevelop. It is expected to be joined by a 104-unit mixed-income project from Brinshore Development at Oak and Larrabee streets. Plans for a third, seven-acre site at the corner of Halsted and Division, however, were put on hold last fall when the CHA announced it would focus its immediate attention on the other two sites.