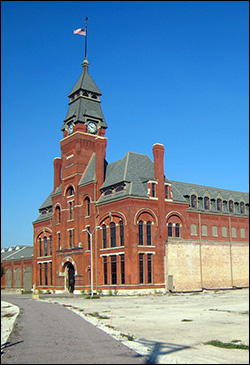 The area known as Pullman encompasses a much wider area than its two historic areas (the older historic area is often referred to as “Pullman” and is a Chicago Landmark district. The northern annex historic area is usually referred to as “North Pullman”). This article deals with all areas. The development built by the Pullman Company is bounded by 103rd Street on the North, 115th Street on the South, the railroad tracks on the East and Cottage Grove on the West.

Since the late 20th century, the Pullman neighborhood has been gentrifying. Many residents are involved in the restoration of their own homes, and projects throughout the district as a whole. Walking tours of Pullman are available.

Pullman has many historic and architecturally significant buildings; among these are the Hotel Florence; the Arcade Building, which was destroyed in the 1920s; the Clock Tower and Factory, the complex surrounding Market Square, and Greenstone Church. Pullman is also home to one of Chicago’s many beautiful Polish Cathedrals, the former church of St. Salomea. It is now used by Salem Baptist Church of Chicago.

In a contest sponsored by the Illinois Department of Commerce and Economic Opportunity, Pullman was one of seven sites nominated for the Illinois Seven Wonders.

Historic Pullman was built in the 1880s by George Pullman as workers’ housing for employees of his eponymous railroad car company, the Pullman Palace Car Company. He established behavioral standards that workers had to meet to live in the area and charged them rent. Pullman’s architect, Solon Spencer Beman, was said to be extremely proud that he had met all the workers’ needs within the neighborhood he designed. The distinctive rowhouses were comfortable by standards of the day, and contained such amenities as indoor plumbing, gas, and sewers.

During the depression that followed the Panic of 1893, demand for Pullman cars slackened. The Pullman company laid off hundreds of workers and switched many more to pay-per-piece work. This work, while paying more per hour, reduced total worker income. Despite these cutbacks, the Company did not reduce rents for workers who lived in the town of Pullman. They rejected those conditions.

Workers initiated the Pullman Strike in 1894, and it lasted for 2 months, eventually leading to intervention by the US government and military. The Strike Commission set up in 1894 ruled that the aesthetic features admired by visitors had little monetary value for employees.

After George Pullman died in 1897, the Illinois Supreme Court required the company to sell the town because operating it was outside the company’s charter. In 1889, the town and other major portions of the South Side were annexed by the city of Chicago. Within ten years, the city sold the houses to their occupants. After the strike, Pullman gradually was absorbed as a regular Chicago neighborhood, defined by distinguishing Victorian architecture. But the fortunes of the neighborhood continued to rise and fall with the Pullman Company for many years.

With industrial and railroad restructuring beginning in the 1950s, many jobs were lost in the city. The neighborhood gradually declined along with work opportunities wand income. People began to move to newer housing in the suburbs. In 1960 the original Town of Pullman, approximately between 103rd and 115th Streets, was threatened with total demolition for an industrial park. Forming the Pullman Civic Organization, the residents lobbied the city and saved their community. It reached its peak of population in 1970.

By 1972 the Pullman Historic District had obtained National, State, and City landmark status to protect the original 900 rowhouses and public buildings built by George Pullman. (It was designated a National Landmark Historic District in 1969 and listed on the National Register of Historic Places. In 1970 it was designated as a State landmark by the Illinois Historic Preservation Agency; and in 1972, South Pullman was declared a City of Chicago Landmark). To protect the character of the historic districts, the city has established guidelines for new building and renovation, administered by the City of Chicago. These are explained in the Beman Committee’s Homeowner’s Guide (the Committee is named after Pullman’s original architect, Solon Spencer Beman.)