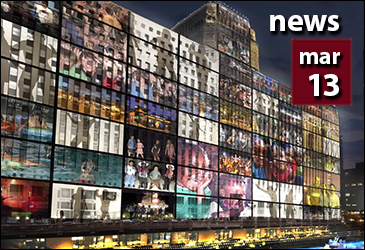 Home to wholesale decorating showrooms, art galleries, and a technology incubator, Chicago’s 4 million square foot Merchandise Mart is preparing to take on yet another role as a giant projection screen. According to the Chicago Tribune, the iconic 1928 Art Deco building will host projected, multimedia art along its nearly three-acre, river-facing southern facade beginning in 2018.

The possibility of utilizing the Merchandise Mart as an artistic canvas was first revealed back in 2014 as part of a preliminary study conducted by the Mayor’s Office and Choose Chicago to light the Chicago River and boost tourism. Known as the Lighting Framework Plan (LFP) initiative, the document also looked at creative ways to illuminate other waterfront structures such as Chicago’s bridges, Civic Opera House, and Lower Wacker Drive.

While next year’s lighting of the Merchandise Mart compliments the city’s commitment to invest more in public art, the Tribune reports that the project will be funded through private—rather than public—channels.