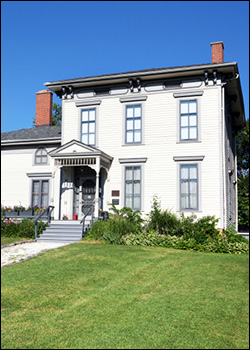 Originally organized in 1872 from adjacent townships (Jefferson, Leyden and Niles) as a village, and named after Henry Ward Beecher’s novel Norwood, or Village Life in New England (1868), Norwood Park was annexed to the City of Chicago in 1893.

The community is now home to many of the city’s firefighters, police officers, construction workers, labor union workers, engineers and other blue collar workers. Norwood Park is known especially for its abundance of green: lawns, parks, churchyards, and trees are its visual hallmarks.

Every Memorial Day there is a parade that runs through Norwood Park. The parade has been a local tradition for almost 90 years, starting in 1922. The community area also boasts the oldest extant building in Chicago, the Noble-Seymour-Crippen House, and Taft High School.

The district was added to the National Register of Historic Places in 2002.

Norwood Park East
Norwood Park East is bounded by Niles, the north branch of the Chicago River, Devon Avenue, Indian Road, Austin Avenue, Bryn Mawr Avenue, Avondale Avenue and Harlem Avenue. The Roden branch of the Chicago Public Library system is located in the neighborhood. The public school that is located in the central part of the area and that the area is mostly zoned to is William J. Onahan Public School, located on West Raven Street. Rufus M. Hitch Public School, located on North McVicker Avenue, is in the area and zoned to as well. The neighborhood is also home to St. Thecla Catholic School and Parish.

Big Oaks
Big Oaks is bounded by Foster Avenue to the north, Nagle Avenue to the east, Gunnison Street to the south, and Harlem Avenue to the west. Opposite of the neighborhood’s southern border at Gunnison Street are the suburb Harwood Heights, and an unincorporated area housing Ridgemoor Country Club. Many of the city’s police officers live in Big Oaks, and in recent years the area has seen an increase in the number of Polish immigrants.

At one time, the area was dominated by a large golf course called Big Oaks Golf Course. In the early 1950s, the golf course was demolished and hundreds of homes replaced it.

The area is home to Oriole Park, which is located in the center of the neighborhood south of Bryn Mawr Avenue. The park covers over 18 acres of land. The park is a Chicago Park District facility.

The Oriole Park Library is located on Balmoral Avenue next to Oriole Park Elementary School. It operates under the Chicago Public Library.

Oriole Park Elementary School is located on Oketo and Balmoral Avenues and is the only school in the area.

The Blue Line has a stop at Harlem Avenue and buses run on Harlem, Higgins, Foster, Canfield and Talcott through or near Norwood Park neighborhood.