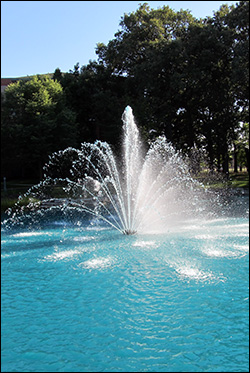 Located 10 Miles North of The Loop.

North Park is bordered by the North Shore Channel on the east, the Chicago River’s North Branch and Foster Avenue on the south, Cicero Avenue on the west (except for the section in the northwest corner, north of Bryn Mawr Avenue, which is part of the Sauganash neighborhood) and Devon Avenue on the north.

Originally a Swedish community and later a stronghold of Orthodox Jews, it more recently has been adopted by newer American immigrants, from Latinos to Middle Easterners, Koreans and Eastern Europeans.

The Good Counsel Province of the Polish Felician Sisters is headquartered in this neighborhood, as is Chicago’s PBS station, WTTW, in the Chicago Production Center. Two universities – North Park University and Northeastern Illinois University – and a Yeshiva make for concentrated educational resources. The closest stop is the Kimball station on the Brown Line.

The Korean-American Chamber of Commerce is located at 5601 North Spaulding Avenue. The education section of the Consulate-General of the People’s Republic of China in Chicago is located at 3322 West Peterson Avenue, away from the rest of the consulate.