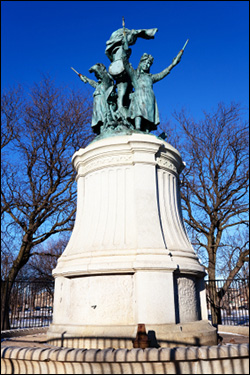 Located 5 Miles West of The Loop.

Once part of Cicero Township in 1869, the eastern section of North Lawndale to Pulaski Road was annexed to Chicago by an act of the state legislature. Thereafter, streets were platted and drainage ditches were installed between Western (2400 west) and Pulaski Road (4000 west). The name “Lawndale” was supplied by Millard and Decker, a real estate firm which subdivided the area in 1870. In 1871, after the Great Chicago Fire, the McCormick Reaper Company (laterInternational Harvester) constructed and occupied a new large plant in the South Lawndale neighborhood. As a result, many plant workers moved to eastern North Lawndale. The remaining area west of Crawford Avenue was annexed in 1889 by a resolution of the Cook County Commissioners.

By 1890 North Lawndale was beginning to be heavily populated by Bohemian immigrants from the Austro-Hungarian Empire. The section most populated by the Czechs was the area from Crawford (Pulaski) west, and from 12th St. (Roosevelt Rd.) to 16th St. Real estate firm W.A. Merigold & Co. was the chief developer of that part of the community, which resulted in the name “Merigold” being associated with the neighborhood. Czech institutions popped up in Merigold, beginning in 1890 with the Slovanska Lipa/Sokol Tabor (Czech fraternal & gymnastic organization) at 13th & Karlov.

In 1892 the Bohemian Catholic Church, Our Lady of Lourdes, was established at the corner of 15th & Keeler. In 1909 the Czech Freethinkers School, Frantisek Palacky, was built at 1525 S. Kedvale. The Merigold neighborhood was also known as Novy Tabor (New Camp) by the Czech immigrants who settled there. The premier Czech institution, established in 1912, was the Ceska Beseda (Bohemian Club) at 3659 W. Douglas Blvd. This club was attended by Chicago’s Czech elite, as well as the visiting Czech elite of the rest of the United States and Czechoslovakia.

It was the place for its members to celebrate and enjoy literature, drama, and music by the most renowned and talented Czech artists. The ethnic Bohemians spread throughout the rest of the North Lawndale neighborhood; they were the original owners of many of the beautiful greystone buildings that graced the picturesque streets of the neighborhood. Many of the elite members of the Bohemian community resided in the vicinity of the 1800 and 1900 blocks of South Millard Avenue.

These men of wealth, as well as the rest of the Czech residents of North Lawndale, were strongly committed to their neighborhood, and were involved in civic affairs. Anton Dvorak Public Elementary School at 3615 W. 16th St. was named after the revered 19th-century Czech composer. Several members of the North Lawndale Czech community occupied positions in city as well as county government. In the post-World War I years, the Czechs began leaving the neighborhood for newer housing in the western suburbs of Cicero, Berwyn, Riverside, and Brookfield.

By the 1920s many of the Czechs were gone, and Jews became the majority ethnic group of the neighborhood after having left the crowded confines of the Maxwell Street ghetto. North Lawndale later became known as being the largest Jewish settlement in the City of Chicago, with 25% of the city’s Jewish population.

Jonathan Kozoldevotes a chapter of Savage Inequalities: Children in America’s Schools (1991) to North Lawndale. He notes that a local resident called it “an industrial slum without the industry.”[5] At the time, it had “one bank, one supermarket, 48 state lotteryagents … and 99 licensed bars.” According to the 1980 census, 58 percent of men and women 17 and older had no jobs.

In 1986 the Steans Family Foundation was founded to concentrate on grantmaking and programs in North Lawndale. It works “in partnership with local residents and institutions to build and enhance the North Lawndale community”.

In the 1990s, the foundation noted signs of revitalization, “including a new shopping plaza and some new housing” associated with Homan Square, stabilization of the declining population, and a rise in new residents, mostly Hispanic. They constituted 4.5% of the population.

According to Charles Leeks, director of NHS, North Lawndale has the greatest concentration of greystones in the city. In late 2004, the City of Chicago enacted “The Historic Chicago Greystone Initiative” to promote the preservation of the neighborhood’s greystone structures.

K-Town is a nickname for an area in North Lawndale between Pulaski Road and Cicero Avenue in which the names of many north-south avenues begin with the letter K (Karlov, Kedvale, Keeler, Kenneth, Kilbourn, Kildare, Kolin, Kolmar, Komensky, Kostner, Kilpatrick , Kenton, Knox, and Keating). The pattern is a historical relic of a 1913 street-naming proposal, by which streets were to be systematically named according to their distance from the Illinois-Indiana border; K, the eleventh letter, was to be assigned to streets within the eleventh mile, counting west from the state line. K-Town is one of the few places where the plan was implemented. The portion of K-Town bounded by W. Cullerton St, W. Cermak Rd, S. Kostner Ave, and S. Pulaski Rd was listed as a historic district on the National Register of Historic Places on September 9, 2010.

“K-Town is a city within a city, a fifteen-minute drive from downtown Chicago’s skyscrapers… I used to joke that the “K” stood for “kill.” I was only half-joking… it had developed a reputation for being one of the rougher places in the city…. K-Town is where my grandfather… and all the other black folk that flocked to the West Side during the mid-to-late-1950s bought proud brick houses on tree-lined streets with crackless cement sidewalks….”

The site of the former Sears headquarters was redeveloped beginning in 1988 as Homan Square. The development has included new construction of owned and rental mixed-income housing; adaptive reuse and restoration of historic properties for use as community center, school, and other facilities; a new community pool and recreation center; and associated retail. Homan Square is often used as an example of the revitalization of North Lawndale.

The Kedzie/Homan station on the Blue Line provides transportation to Midway, The Loop and beyond and is a connection point to numerous bus lines.