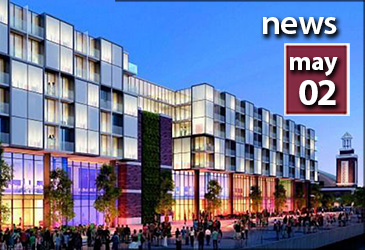 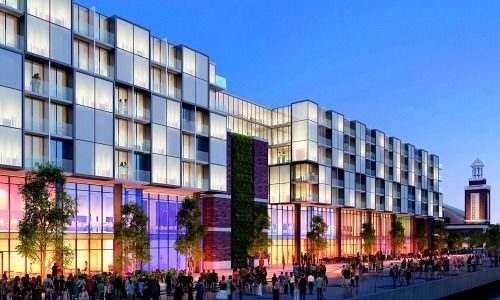 April appears to a busy month in regards to announcements about Navy Pier’s ongoing renovations. Just recently, plans were released showing the expansion of the Shakespeare Theater into the former space occupied by the Skyline Stage, while the proposed hotel for the pier has just landed construction financing. And according to information reported by finews.asia, a financial news outlet based in Singapore, the Zurich, Switzerland-based Acron Group has agreed to fund the project which will stand seven stories tall, with a setback eighth-floor penthouse featuring a rooftop bar and terrace.

The hotel plans were drawn up by the local architecture firm KOO LLC, whose hospitality experience includes a handful of local hotel projects, including The Wit in the northern Loop, the under construction Marriott Autograph Hotel in Streeterville, the replacement hotel for the Inn at Lincoln Park and the never formally approved Out Hotel in Boystown.

The new hotel will be located towards the eastern end of the pier, where the newer structures containing convention and event space in the upper floors now stand. These structures were built during original renovation of the 1990s which converted the pier from what was at the time a largely abandoned shipping terminal into the state’s largest tourist attraction. Directly east of the existing convention halls and the planned hotel is the Grand Ballroom, part of the original design of the pier by architect Charles Sumner Frost and completed in 1916. According to the renderings that appear in the story from finews.asia, this original construction will remain as is.

The hotel will include 222 rooms, and should serve as an activity generator throughout the year for the far end of the pier. The hotel will be managed by Hilton under the Curio Collection of hotels, which all operate under independent names including the soon-to-open LondonHouse hotel located within the fully renovated London Guarantee Building at Michigan and Wacker. As part of this hotel collection, it is likely that a unique formal name for this new hotel at the pier has yet to emerge. Construction is expected to begin this September with completion anticipated for fall of 2018.

Hot Lighting Trends for the Kitchen & Bath
Scroll to top