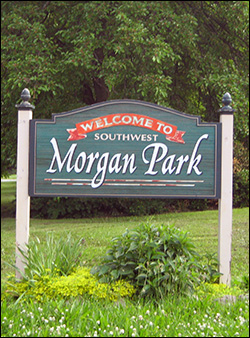 Located 13 Miles Southwest of The Loop

Morgan Park is located south of the Beverly (properly Beverly Hills) neighborhood and shares a border at 107th St. with Beverly on the north, Halsted St. (north of 115th St.) and Ashland Ave.(south of 115th St.) on the east, 119th St. on the south, and California Ave. on the west, and includes Mount Greenwood Cemetery. Beverly Hills and Morgan Park share the same ZIP code. The community was initially settled in the mid-ninteenth century and known as North Blue Island (because of its geographic relationship to the already established community of Blue Island to the south), with the largest landholder being the Englishman Thomas Morgan, who in 1844 purchased all of the property between what is today 91st St. on the north, 119th St. on the south, Western Avenue on the west, and roughly Vincennes Ave. to the east. Here he cleared trees and operated a cattle and sheep ranch for the next quarter of a century.

In 1869, the Blue Island Land and Building Company purchased three thousand acres of this property from the Morgan family and laid out streets, planted thousands of trees, and built houses for those who were attracted to the bucolic atmosphere of the new community. The goal of the organization was to create a suburban community “..free from smoke and other nuisances that [were] becoming more and more intolerable in the city”.

Both the president and the treasurer of the Blue Island Land and Building Company were executives of the Rock Island Railroad at the time the former company was incorporated, and they immediately used their influence to have a spur line built to serve the new community. This arrangement lasted until 1889, when the “Suburban Line” as we know it was built between Gresham and the Vermont Street station in Blue Island, at which time the dummy line, as it was called, was removed, much to the consternation of those who lived immediately nearby. At this point Morgan Park received three handsome passenger depots (at 107th St., 111th St., and 115th St.), with the 111th Street station being an elaborate Queen Ann structure sited immediately east of Bohn Park.

Morgan Park is primarily an upper middle-class community, with a housing stock to reflect this demographic, although there are several estate-sized houses on the ridge at Longwood Drive. Many of the buildings in the neighborhood were designed by notable architects, including Dwight Perkins, Dankmar Adler, Murray Hetherington, John Hetherington, Palliser, Palliser & Co. Normand S. Patton and Harry H. Waterman. The community is home to the Beverly Arts Center.