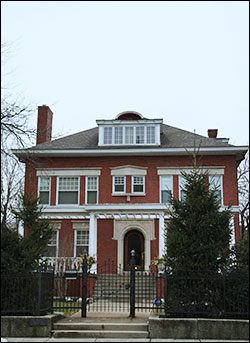 Kenwood is located on the shore of Lake Michigan on the South Side of the city. Its boundaries are 43rd Street, 51st Street, Cottage Grove Avenue, and the lake. Kenwood was originally part of Hyde Park Township, which was annexed to the city of Chicago in 1889. Kenwood was once one of Chicago’s most affluent neighborhoods, and it still contains some of the largest single-family homes in the city. It contains two Chicago Landmark districts – Kenwood and North Kenwood. A large part of the southern half of the community area is in the Hyde Park-Kenwood Historic District.

In recent years, Kenwood has received national attention as the home of U.S. President Barack Obama.

Kenwood was settled in the 1850s by wealthy Chicagoans seeking respite from the increasing congestion of the city. The first of these residents was John A. Kennicott, who built his home near the Illinois Central Railroad at 48th Street. He named the home Kenwood after his ancestral land in Scotland, and when the Illinois Central Railroad built a small depot near 47th Street, they named the station Kenwood as well. Shortly afterwards, the name Kenwood began to be applied to the whole area.

The southeastern portion of Kenwood contains the Indian Village neighborhood, which features the Chicago Landmark Powhatan Apartments and the National Register of Historic Places Narragansett. The 1902 Blackstone Library is another well-known landmark in the neighborhood. It continues to be part of the Chicago Public Library system. The recently reopened Hyde Park Art Center, located on Cornell Avenue just north of 51st Street and East Hyde Park Boulevard, is Chicago’s oldest alternative exhibition space[citation needed], with an on-site school and studio.

The area that contains the Hyde Park community area and the southern half of Kenwood (south of 47th Street) is sometimes referred to as Hyde Park-Kenwood.

Kenwood is served by the CTA Red & Green Lines, and many connecting CTA buses at the 47th St. & 51st St. stations.