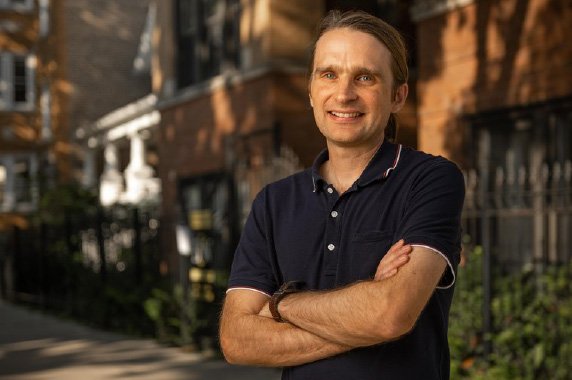 It could be a time to mourn the household wealth that didn’t materialize here as other cities outpaced Chicago in the post-housing-bust period. Then again, two economists tell Crain’s they see things differently.

neighborhood was slightly scruffy but within a mile of the hip core of Logan Square.

“There were tough guys on the corner, and when I had guests I had to drive them to the

Like most people, English didn’t know then that a massive housing crash lay just ahead.

Chicago-area home prices peaked in September 2006, the month he bought his three-bedroom

condo, according to a yardstick now known as the S&P CoreLogic Case-Shiller Indices. Prices slid ever-downward through March 2012, with a few small and short-lived

upticks along the way.

The condo “pretty quickly was worth way less than I paid,” English recalls now. He estimates it was worth about $200,000 at the bottom of the housing market.

Over the years, English’s neighborhood improved dramatically, with the hot zones around Logan Square to his north and Bucktown to his east expanding in the 2010s and the 606 openings in 2015. An entrance to the popular recreation trail is a block south of English’s condo.

Thanks to the improvements all around his home, English’s condo is now worth about $385,000, he said, or roughly 30% more than he paid for it 15 years ago.

But the great majority of Chicago-area homeowners don’t live near the 606, or in the West Loop or a few other spots on the map whose home values soared in the 2010s. For much of the past decade, including the pandemic era, Chicago has had some of the slowest rising home prices among major cities, as tracked by Case-Shiller.

A few weeks ago, just ahead of this month’s 15th anniversary of peak pricing, Case-Shiller reported Chicago prices were about 1.2% below their old peak as of June, while nationwide, prices were 41.3% above their old peak. Case-Shiller’s primary index tracks the prices of single-family homes. Condominiums, tracked separately, in Chicago are at roughly the same point as single-family homes: Their value was about 1% below the old peak in the latest report.

That old peak and the valley that followed mean little to people who weren’t in the housing market back then, but English remembers the anxiety. With the mortgage deeply underwater, “it’s a bad feeling, knowing you can’t move for years because you’ll take a financial hit,” said English, who works for a research institution.

Slow-rising home values can make Chicago homeowners feel they’ve invested poorly in a vehicle that has long been considered one of the U.S. economy’s most reliable generators of household wealth. That’s particularly true if they’re chatting about home values with friends and relatives in high-rising markets like Seattle, where according to Case-Shiller home values are up almost 75% since their old peak in July 2007. (Not all cities peaked at the same time, and none of these figures account for changes in the property tax burden.)

Chodorow-Reich, an associate professor of economics at Harvard University and one of three authors of an August paper that explored home price growth in U.S. cities over the past two decades.

In the city of Seattle, the median price of homes sold in the past year is just under $800,000, according to Redfin, the online real estate marketplace. In the city of Chicago, it’s $340,000.

Geoffrey J.D. Hewings echoes Chodorow-Reich. A professor of economics and geography at the University of Illinois at Urbana-Champaign, Hewings is the emeritus director of the Regional Economics Applications Laboratory, which tracks home prices in Illinois and its major cities for the Illinois Realtors professional association.

Hewings gave the example of a recent graduate student in his program who moved to San Francisco and “told me how much of his income he is spending on a really mediocre apartment. He’s living in San Francisco; it’s a wonderful place, but he doesn’t have enough money to enjoy it.”

San Francisco home prices are up almost 50% since their May 2006 peak, according to Case-Shiller. The increases have boosted longtime owners’ household wealth dramatically, but they have also sparked a housing affordability crisis. The same is true in Seattle, San Diego, Portland, Ore., and other cities whose home values have raced ahead of Chicago’s. We have our gentrification trouble spots, but compared with cities that are being remade by rampant gentrification, it’s mellow here.

When World Business Chicago advertised in Texas last week to claim the state’s recent conservative moves on abortion, voting rights and COVID made it harder to attract and retain employers, Hewings thought there was a better idea: “advertise how much easier the housing market is on homebuyers.”