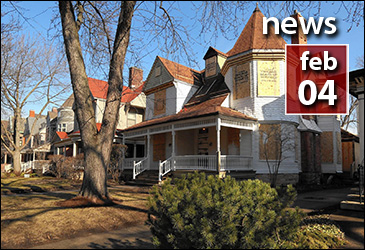 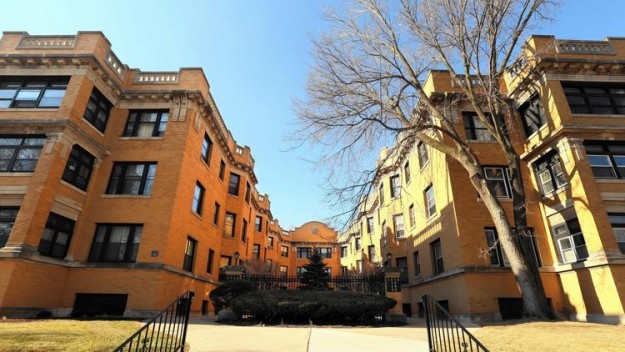 Timika Hoffman-Zoller and her husband moved to Hyde Park in 1996, so he could attend grad school at the University of Chicago. The location was convenient to his classes as well as the many concerts, lectures and enrichment programs the university offers the public.

At first an at-home mom, Hoffman-Zoller turned to community activism. She took on issues like childhood safety and parks cleanup. Last year she was named president of the Hyde Park-Kenwood Community Conference, a nonprofit community watchdog and advocacy group.

“I loved living here before, but now I’m OMG!” Hoffman-Zoller gushed. “This is a hot spot for young people and new families.”
She’s not the only one to feel that way. Hyde Park and Kenwood enthusiasts list the historic architecture, attractive price points, diverse population, massive green spaces and easy transportation among their reasons for making their homes here.
Lamar Austin, pictured in the 4800 block of South Kenwood Avenue, is a Redfin real estate agent who moved to Kenwood 10 years ago and now resides in a 1920s red brick six-flat within the Hyde Park-Kenwood Historic District. (Phil Velasquez / Chicago Tribune)

“Hyde Park is an incredibly inclusive community where you can rent a one-bedroom apartment for $1,000 a month, and you can buy a home for $2.5 million,” said Peter Cassel, director of community development at Mac Properties. “It’s that range and diversity of Hyde Park that is most special about it.”

Mac Properties is the developer and manager of City Hyde Park and other properties in Chicago and Missouri.

“Students are taking root,” said Redfin real estate agent Lamar Austin. “After four years or grad school, they get jobs and are ready to start families. They are familiar with the area, and they find they can get a bigger bang for their buck.”

The housing stock of Hyde Park and Kenwood is unlike anywhere else in the city, said Susan O’Connor Davis, a real estate agent at Berkshire Hathaway HomeServices Koenig Rubloff and author of “Chicago’s Historic Hyde Park” (University of Chicago Press, 2013).

The vast majority of homes are centenarians, built during the late 1800s and early 1900s for Chicago’s wealthiest influencers of the day. They erected grand mansions designed by leading architects like Daniel Burnham and Frank Lloyd Wright in Queen Anne, Romanesque, Prairie School and numerous European Revivalist styles. During that time period, the University of Chicago was founded in 1891, and the Columbian Exposition was staged in 1893.

Today a vast array of housing options are available for both renters and owners, although they vary by location. The mansions of yesteryear have mostly been landmarked by the city or listed on the National Register of Historic Places; many cannot be torn down or significantly altered without approval. That means new construction is rare, but some homes have been converted to three- to six-unit condominiums or apartments.

The 4800 block of South Kenwood Avenue in Chicago’s South Side Kenwood neighborhood. “North Kenwood is more moderately priced,” said Redfin real estate agent Lamar Austin. “You can get a single-family for $300,000 to $700,000, but it needs work.” (Phil Velasquez / Chicago Tribune)

East Hyde Park, which runs east of the Metra line to Lake Michigan, is known for high-rise condominiums that overlook the water and skyline.

A fully rehabbed single-family home in Hyde Park could sell for $3 million to $4 million, and a home in disrepair is a bargain at $900,000, Austin said.

Condominiums tend to be vintage, and many are spacious. Four and five bedrooms are not uncommon. Parking is plentiful.

Cooperatives are another option. Promontory Apartments, for example, is a 1949 Mies van der Rohe tower at 5530 S. Shore Drive.

Lexington Homes this spring will break ground on 20 town homes at 4639 S. Lake Park Ave. Lexington Shore, as the enclave is named, offers a choice of two floor plans with three or four bedrooms, 2 1/2 to 3 1/2 baths, roof decks and two-car garages. The town homes are priced from $360,000. Lexington is targeting young marrieds, perhaps with children, who desire a stable residential area close to downtown, said principal Jeff Benach.

“You’re closer to the lake than in some of the North Side areas,” he said. “Some people think the best view of the city skyline is looking north on Lake Shore Drive.”

Apartment choices run from historic to contemporary, and rents are lower than in other areas of the city. A recent report by Zillow, an online real estate database, shows January median rent for a one-bedroom apartment in Hyde Park at $1,100 and in Kenwood at $930.

Farther north, the January median rent for a one-bedroom apartment in Lincoln Park was $1,670 and in the Loop, $2,190.

In Hyde Park and Kenwood, most of the apartment offerings are vintage, and their conditions vary. Many landlords have updated their properties to keep up with current tenant expectations and, of course, to charge higher rents.

“Hyde Park is changing, and all for the positive,” he said. “Rents are going up, but how much is a loaded question. I think there is still room for growth.”

More trends he is observing: Students and young professionals, who make up a large percentage of the area’s renters, want modernized kitchens and baths, and hardwood floors. In-unit washers and dryers are mandatory. Many prefer smaller spaces where they can live alone rather than share with roommates.

“The millennials are creating a different supply that is about being catered to,” he said. “On a positive note, that means better buildings and better services for all renters out there.”

City Hyde Park, a 15-story mixed-use tower with a zig-zagging glass facade, was built from the ground up to draw a diverse clientele. It has 180 studio, one-, two- and three-bedroom apartments and a lengthy amenity menu. Rents range from $1,803 to $4,655. Thirty-six apartments are designated affordable, renting for $600 to $750. The development, 5101 S. Harper Ave., will be anchored by Whole Foods, Marshalls department store and Michaels craft store.

“Prior to City Hyde Park, there was not an ADA-compliant multifamily building here,” Cassel said. “They were all built before the law was changed. We believed there was a strong market need for a contemporary, well-amenitized building with fantastic design on the inside and outside.”

Traffic so far is encouraging, he said.

Also in the works by Mac Properties is Solstice on the Park, a Jeanne Gang-designed mixed-use development with 250 apartments at 5540 S. Cornell Ave.

A project under construction is Vue53, a mixed-use project by Mesa Development at 1330 E. 53rd St. The building will have 267 apartments and 30,000 square feet of retail space. Fall move-ins are planned.

With these developments and more to come, including the Obama Presidential Library and Museum, neighborhood watchers are bullish about the future of Hyde Park and Kenwood.

“In general, the North Side is so crowded and expensive, you can’t help but think people will keep looking at the South Side as a viable alternative,” O’Connor Davis said.

“Buy, buy, buy,” Austin said. “With all the development going on, prices are obviously going to go up.”

Hyde Park and Kenwood are moving in the right direction, said Hoffman-Zoller, who supports the new residential options. At the same time she urges developers and community leaders to also embrace maintaining the present economic diversity.

“They need to make sure people can stay here and not get priced out,” she said. “Eventually, I will be a senior, too, and I don’t want to leave Hyde Park.”