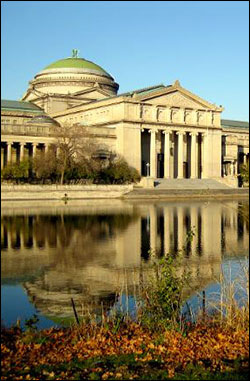 Hyde Park’s official boundaries are 51st Street/Hyde Park Boulevard on the north, the Midway Plaisance,between 59th and 60th streets, on the south, Washington Park on the west, and Lake Michigan on the east. According to another definition, a section to the north between 47th Street and 51st Street/Hyde Park Boulevard is also included as part of Hyde Park, although this area is officially the southern part of the Kenwood community area. The area encompassing Hyde Park and the southern part of Kenwood is sometimes referred to as Hyde Park-Kenwood.

In 1853, Paul Cornell, a real estate speculator and cousin of Cornell University founder Ezra Cornell, purchased 300 acres of land between 51st and 55th streets along the shore of Lake Michigan, with the idea of attracting other Chicago businessmen and their families to the area. The land was located seven miles south of Downtown Chicago in a rural area that enjoyed weather tempered by the lake – cooler in the summer and warmer in the winter. It was conveniently located near the Illinois Central Railroad, which had been constructed two years earlier. Cornell successfully negotiated land in exchange for a railroad station at 53rd Street. Hyde Park quickly became a popular suburban retreat for affluent Chicagoans who wanted to escape the noise and congestion of the rapidly growing city.

In 1857, the Hyde Park House, an upscale hotel, was built on the shore of Lake Michigan near the 53rd Street railroad station. For two decades, the Hyde Park House served as a focal point of Hyde Park social life. During this period, it was visited or lived in by many prominent guests, including Mary Todd Lincoln, who lived there with her children for two and a half months in the summer of 1865 (shortly after her husband was assassinated). The Hyde Park House burned down in an 1879 fire. The Sisson Hotel was built on the site in 1918 and was eventually converted into a condominium building (the Hampton House).

In 1861, Hyde Park was incorporated as an independent township (called Hyde Park Township). Its boundaries were Pershing Road (39th Street) on the north, 138th Street on the south, State Street on the west, and Lake Michigan and the Indiana state line on the east. The territory of the township encompassed most of what is now the South Side of Chicago. Hyde Park Township remained independent of Chicago until it was annexed to the city in 1889. After annexation, the definition of Hyde Park as a Chicago neighborhood was restricted to the historic core of the former township, centered on Cornell’s initial development between 51st and 55th streets near the lakefront.

In 1893, Hyde Park hosted the World’s Columbian Exposition (a world’s fair marking the 400th anniversary of Christopher Columbus’ arrival in the New World). The World’s Columbian Exposition brought fame to the neighborhood, which gave rise to an inflow of new residents and spurred new development that gradually started transforming Hyde Park into a more urban area. However, since most of the structures built for the fair were temporary, it left few direct traces in the neighborhood. The only major structure from the fair that is still standing today is Charles Atwood’s Palace of Fine Arts, which has since been converted into the Museum of Science and Industry.

In the early decades of the twentieth century, many upscale hotels were built in Hyde Park (mostly along the lakefront). Hyde Park became a popular resort area in Chicago. Most of these hotels closed during the Great Depression, and were eventually converted into apartment and condominium buildings (most of which are still standing today).

The part of Hyde Park bounded by 55th Street on the north, the Midway Plaisance on the south, Washington Park on the west, and the Metra line on the east is the official territory of the University of Chicago campus. Most of the university’s major facilities are located within the western half of this area (west of University Avenue). The part of the campus east of University Avenue is mostly residential, with many of its residents being University of Chicago faculty.

The part of Hyde Park located east of the Metra line is called East Hyde Park. This area has a large number of high-rise condominiums, many of them facing the lakefront. In this respect, East Hyde Park differs markedly from the rest of Hyde Park, where the vast majority of the residential structures are three-story apartment buildings and single-family homes, with only a small number of high-rise condominiums.

The area bounded by 47th Street on the north, 51st Street/Hyde Park Boulevard on the south, Cottage Grove Avenue on the west, and Lake Michigan on the east is officially the southern part of the Kenwood community area, but it is often unofficially considered to be part of Hyde Park due to the shared culture and history of the two areas. The name Hyde Park-Kenwood is sometimes applied to the area encompassing Hyde Park and the southern part of Kenwood. The southern part of Kenwood is notable for its many luxurious mansions, which were built at the end of the nineteenth and the beginning of the twentieth centuries for wealthy Chicagoans. A number of prominent Chicagoans currently reside in this area. In particular, a mansion on the corner of Greenwood Avenue and 51st Street/Hyde Park Boulevard (on the southern edge of Kenwood) has been the home of U.S. President Barack Obama since 2005. A mansion on the corner of Woodlawn Avenue and 49th Street was built for Nation of Islam leader Elijah Muhammad and is currently owned by his successor Louis Farrakhan. In addition, there is a mansion in the 4900 block of Woodlawn Avenue that was once the home of boxing legend Muhammad Ali.

Hyde Park is connected to the rest of the city by CTA buses and the Metra Electric Line. CTA buses provide express service to the downtown, and they also allow transfers to Red Line and Green Line trains to the Loop. The Metra Electric Line, which uses the tracks of the former Illinois Central Railroad, has several stops in Hyde Park and provides service to Millennium Station in the downtown.

Additional CTA bus services, paid for by the University of Chicago: