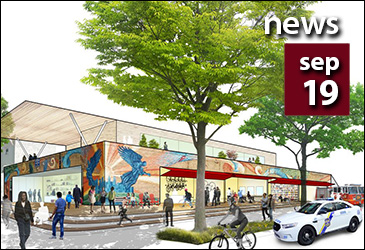 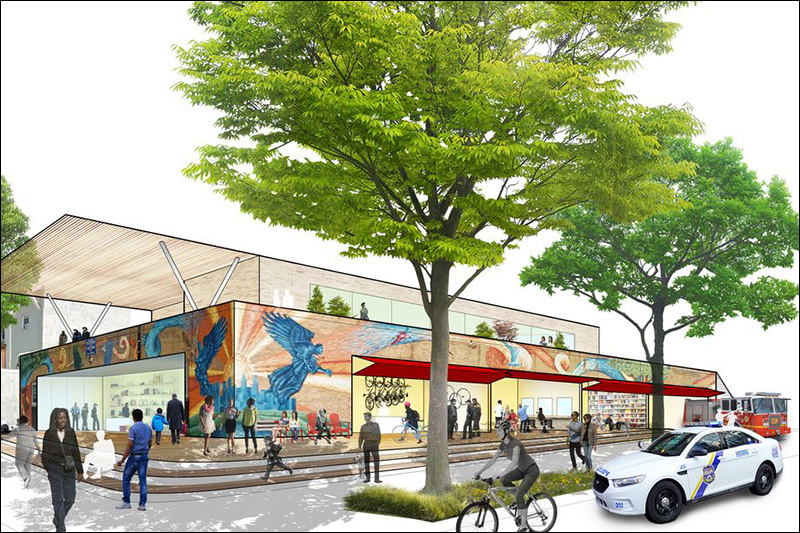 When was the last time you went to a city library, or used a community rec center? Whether it’s due to shifting technology, disrepair and disuse, or the changing population of a neighborhood, many of these spaces have been underutilized or ignored. But a new plan by Studio Gang envisions these undervalued civic assets as key points in a plan to revitalize underserved areas in Rust Belt cities.

The new Civic Commons proposal, developed by architects, designers, and urban planners at Jeanne Gang’s Chicago-based firm, suggests that rebuilding commercial corridors and underfunded neighborhoods begins not with huge developments or radical new infrastructure, but by repurposing and reimagining what’s already there. The blueprint, outlined in a new, nearly 100-page booklet, calls for a strategic updating of the public realm, using libraries, police stations, and parks for form the backbone of an engaged, active and technically savvy neighborhood.

Inspired by tactical urbanism, the program, which can be applied to cities across the country, celebrates the possibilities of making yesterday’s public spaces newly relevant to today’s public. Recalling the philosophy of fellow Chicagoan Theaster Gates, who transformed a bank on the city’s southside into an arts hub, it’s about giving new life to structures that were once centerpieces of the neighborhood.

“You don’t often get to pick where your physical plant is, or where your buildings are,” says Gia Biagi, the Project Leader for Civic Commons and the Senior Director, Urbanism and Civic Impact at Studio Gang. “Populations move and change. How do we reveal what’s there in these neighborhoods,  connect people to it, and make it relevant?”

The project and plan came about as part of the Reimagining the Civic Commons project, a $40 million effort to help rebuild urban centers. Funded by $20 million worth of grants from the JPB Foundation, the John S. and James L. Knight Foundation, The Kresge Foundation and The Rockefeller Foundation, along with $20 million in matching funds from local sources, the project will focus on redesigning and revitalizing Akron, Chicago, Detroit, and Memphis.

Last year, the organizations involved began using Philadelphia, specifically the Elmwood and Paschalville neighborhoods on the city’s southwest side, as a pilot for how this effort would work. The area is ripe for renewal, especially because a local soda tax has created dividends that can be used to fund local investment. Studio Gang was brought in to make a proposal that isn’t an official city plan per se, but an attempt to take the research and work it’s done on the subject and apply it to a real-world neighborhood.

The idea of giving these older structures a second life comes out of the studio’s Polis Station project, a reimagining of police stations for the 21st century. The core conceit, turning a station into a community center to encourage outreach and strengthen community connections, seemed like a great starting point for revitalizing urban neighborhoods, and engaging residents in the process (“”At the end of the day, the people with the most at stake should have a seat at the table in making decisions” says Biagi.)

Inspired by close community feedback, Studio Gang’s savvy reimagining of a single piece of infrastructure suggested the idea could play at scale. What if that reimagining was done across a neighborhood, and all the disconnected pieces of public space—parks, libraries, community centers—were linked together in an urban network?  Design wouldn’t just reshape the look of a public building, but turn it into a social anchor that connects the community.

“Part of what we’re doing here is thinking not only what design can bring to these conversations, but how it can relate to these other questions that cities are facing,” says Biagi.

Take the library as an example, such as the huge brick branch of the Philadelphia Public Library in Paschalville. The Civic Commons report suggests making an array of fixed, starting with opening up the entrance to the street and transforming a building meant for books into a tech hub. Eventually, added programming will help make it a hub and active community space.

Biagi, who previously spent 15 years working for the City of Chicago, said the importance of having dedicated physical space for events to take place, and communities to work together, can’t be underestimated. 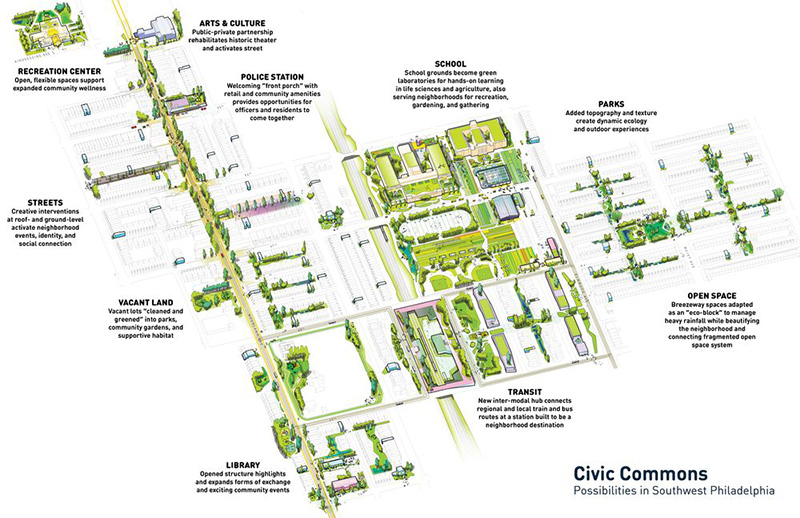 This map explain how every civic building can be reimagined and linked together.    Studio Gang

But the plan goes far beyond a single building. Studio Gang’s suggestions for Philadelphia go on to suggest renovating other nearby public buildings with the same ideas in mind. The Frances Meyer Recreation Center could be transformed into a Wellness Center. Police stations could be outfitted with green roofs and public porches to encourage community engagement. Schools could turn green spaces into community gardens. By turning these separate spaces into nodes of activity, they become centers in a network of public programming.

The possibilities of overlap and interconnection—turn the rec hall/wellness center into a clinic that provides health care—allow the Civic Commons plan to address numerous issues on the minds of city administrators.

“If you have a library, here’s what you can do to open it up,” she says. “Here’s how the library can have a relationship to the park down the street, and here’s how we can get this collective civic energy out of these assets.”

Studio Gang’s suggestions address an intriguing quirk in city redevelopment. While local government often controls a great deal of public space in a city, decreased funding from outside sources and other levels of government means it’s hard to create new civic infrastructure. But, using the model outlined by the Civic Commons proposal activates that underfunded space to build upon what’s already there, especially local community groups and initiatives.

Great urban planning and design may not come from redesigning the street, but from seeing it in a new light. As Biagi explained, the bold ideas are important, but the practical solutions, the breadcrumbs that lead up to the large-scale design solutions and more capital investment, are just as vital.