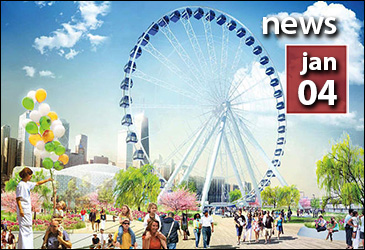 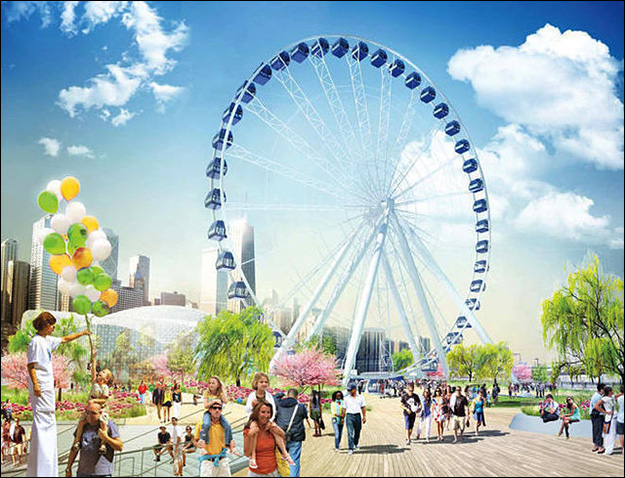 Navy Pier wasn’t broke, so why dig it up? A phrase from a planning document guides the digging and landscaping and Ferris-wheel-refitting underway. That phrase is: “It is helpful to think of Navy Pier as a park.”

Inside of two weeks, Navy Pier begin its Centennial year. After the bulldozers recede, it will boast a lawn near downtown and open views of Lake Michigan at its east end, possibly with a place to take a date or score a hotel room. From the east to the west, if its owners hit their targets, it will feel like a windy, jovial, memorable park.

And this denotes a shift because, in recent decades, Navy Pier has felt like a park in the way that Whole Foods feels like a community center. Sure, you can find amazing lakefront scenery and while away the lunch break watching commercial boats, but a lot of vendors can also find a way to make you part with your money.

Now, the nonprofit that operates Navy Pier is working to open its urban design to the Magnificent Mile, the lake, and the sense of grandeur that makes people invest in public space. Back in the ’20s, its form invoked that brand of majesty.

Chicago has opened several new paths and promenades to walkers, runners, boaters and bikers in the past few years. Hence the 606, the Chicago Riverwalk, and Maggie Daley’s play-a-palooza all arrived roughly around the same time, each one adding open sky and natural vistas to the quality-of-life package.

But on the Pier, where nobody is going to live and relatively few people are going to work, expanding open space also means planting landscape to bloom when Chicagoans spend money there. Or so reckons Steve Haemmerle, Navy Pier’s Executive Vice President for Design and Construction, who spoke to me by phone the day after the Cubs fell to my beloved New York Mets.

“We really wanted to better connect it with the city both physically and emotionally,” Haemmerle said. In the mid-1970s, he explained, Navy Pier transmuted into a “festival marketplace” from the same gene pool that delivered Fanieul Hall in Boston and South Street Seaport, the carnivalesque, the theory went, would snuff fears of the city as lawless and draw people to spend.

But around the festivals, Beantown and Gotham and Chi-town absorbed lots of merriment. They have all attracted a discerning residential base downtown — and retail that once coaxed visitors to visit now looks a bit like a pileup. James Corner Field Operations — the naturalist landscape architecture firm that co-designed New York’s High Line — won the nod in a competition to make Navy Pier an urban glory about urban glory.

“The design team put a really strong emphasis on getting rid of the clutter,” Haemmerle told me. Picking off booths and superfluous gateways, the client asserts, can make the experience of Navy Pier more “genuinely unique.” Working off of a “Centennial Vision” we used to pull the quote above, Navy Pier has set about replacing some of the busker tents with lawns, and trading clutter for open views of the lake.

And let’s be fair — in the 1990s, Navy Pier had come to feel a bit like a shopping district with water on three sides. This photo from those days shows its sealed-off feel. Those folks on the cruise ship sensed the lake many times more sharply than anyone on the pier.

Moves to make landscape a star recur in public investment across the world’s big cities. Paris with its beach, New York with its pedestrianized Times Square, and Chicago are all straining to control damage to air quality and tamp down healthcare costs while attracting a discerning workforce. The sweet spot in all these targets involves making public life more open and easier to navigate.

So beyond cleaning the lines, Navy Pier is moving east. Because from day one, what made Navy Pier unique showed up in its name:

There’s something out there over the lake horizon — and Field Operations’ scheme guides eyes and feet toward it, getting visitors close enough to the water that it can persuade them to stay on the pier.

Navy Pier also plans to offer food and lodging on the pier, down the line. “Part of what we’re doing is adding 45,000 square feet of dining and entertainment at the end,” Haemmerle said. “We are looking at adding a small hotel, to create a more permanent presence of people.”

People create a positive feedback loop — as surroundings feel more attractive, more people stay longer, which attracts more people. This seems to flow against the festival logic you see below:

From an outdoor mall where ships happen to peek, then, Navy Pier aims to become a window onto the Great Lakes.

At the other end, Navy Pier also aims to create a cultural lasso to downtown. On the drawing boards and named for its funding foundation, Polk Brothers Park provides a lawn, which architects call a datum — something that announces a shift from the go-go Loop to a gentler zone.

And in the middle of the pier, retooling makes being on the pier an end to itself. The new “wave wall” and staircase evoke couture dresses or museum pieces- you go to them for their embedded cool:

By contrast, before the architects had at it, the wall beneath the staircase beckoned you to scram and grab another cotton candy stick.

And hello, unfiltered reverence for the shipbuilding story:

In canonizing the pier’s maritime past, to be sure, the operators want to attract more year-round use and the higher rents it brings. But can we spot an idealistic speck in the strategy?

From New York, that speck looks as bright as the Mets’ prospects looked during our call. If Navy Pier wanted to cash in or max out, public space would acquire a starchitect and condos on either side. This plan includes a larger Ferris wheel, a beacon for more public uses by more people — and arguably more sorts of people. The intricate forms and open lines reclaim the motion of ballroom ships that used to patrol the harbor.

And it moves that sense of motion from the upper deck to the upper body: a city with more running paths encounters less cardiac trouble. I’d bet you’d rather run, walk or pedal around the new South Dock than around the old one.

This, see, is the redesigned South Dock:

And this is the old one.

Haemmerle says he hopes to complete the South Dock and a Ferris wheel upgrade by the end of 2016. If Navy Pier can draw enough funding, and buzz, the east end will get its overhaul soon after.

You can suspect a real-estate rush for wellness cachet, but that Ferris Wheel reminds you that the new Navy Pier remains eager to amuse. The strategy more accurately honors Daniel Burnham’s dictum to “make no little plans” by making Chicago’s biggest landmark the main attraction.