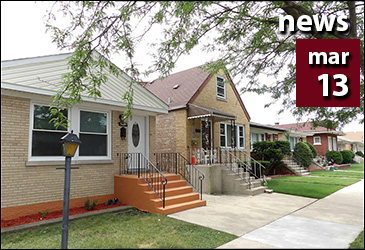 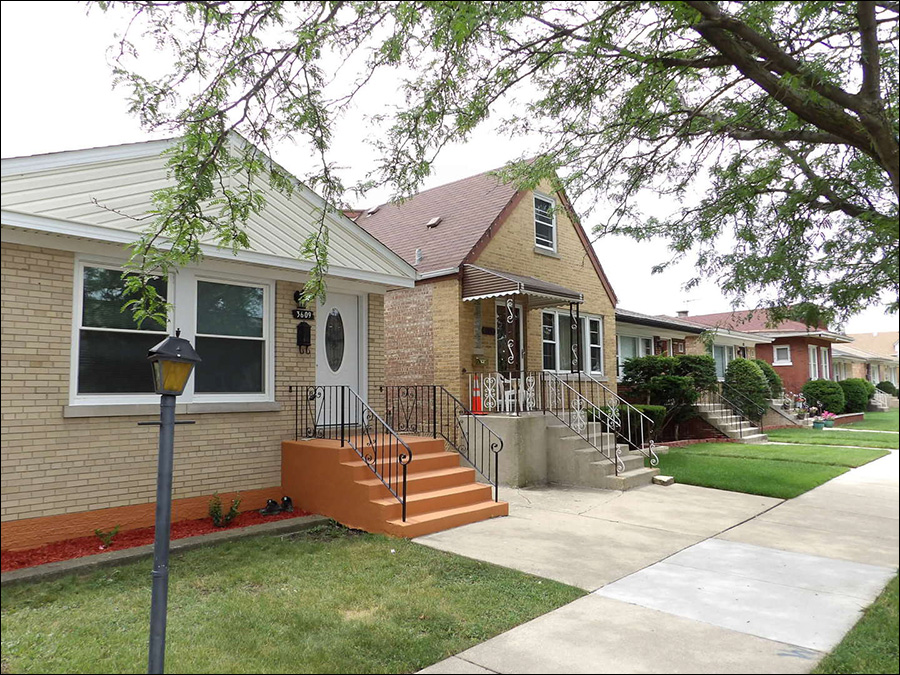 Ten years ago, a map of ZIP code 60629, a swath of the city just east of Midway Airport, was filled with hundreds of red dots indicating foreclosed homes. Now, thanks to a decade-long wave of rehabbers flipping distressed homes, that same area has homes that have been refreshed and resold.

In 60629, which encompasses parts of Chicago Lawn, West Lawn and Marquette Park, 692 homes have been flipped in 10 years, the most in any Chicago-area ZIP code, according to figures provided exclusively to Crain’s by Attom Data Solutions. The data cover about 300 ZIP codes in the region, for 10 years, 2008 through 2017, a period in which more than 41,900 Chicago-area homes were flipped.

Five ZIP codes—four on the city’s South Side and one in suburban Bolingbrook (see chart)—emerged as the epicenters of home flipping, each of them with more than 500 properties going through the process in the past 10 years.

“At that level of density, flipping creates real potential for rejuvenating a neighborhood,” said Jeff Bartow, executive director of Southwest Organizing Project, a community action and development organization. “It’s a concentration of investment that people can see, (and it tells) them that this is a neighborhood where the trend is up, not down.

Belinda Mitchell, a real estate agent whose B&B Realty has done flips in two of the top five ZIP codes, 60440 and 60628, says that in areas where there’s been a cluster of flips, “you can see the enrichment in the area. A lot of those homes hadn’t been fixed up in years, and they weren’t going to get fixed up by their owners, who were struggling to hold on.”

It’s unlikely, she and Bartow said, that hundreds of in-place homeowners would have found the money to rehab their homes in the past decade. This is not to suggest that the foreclosure crisis that forced them out was good news, but the silk purse made from that sow’s ear was that the empty and distressed homes “became opportunities for renewal,” Bartow said.

Set in motion by the foreclosure crisis that emptied scores of homes all over America and popularized by TV shows like “Flipping Out,” “Flip or Flop,” “Masters of Flip,” the flipping business hit an 11-year high in 2017, according to Attom. More than 207,000 houses, condos and townhouses were flipped in the U.S. during the year. 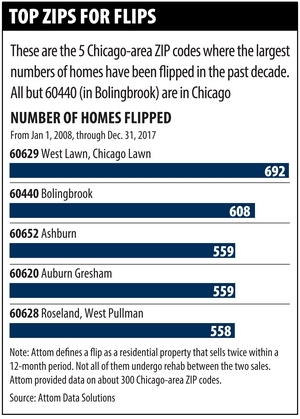 It was far more common for flips before the housing crash to be profiteering hand-offs between related parties, jacking up the price each time to take out ever-larger mortgages, said Daren Blomquist, Attom’s senior vice president. In recent years, thanks in part to stricter lending standards, “most of the flips we see involve a rehab and resale” at arm’s-length, Blomquist said.

One way to tell is by measuring the spread between the first sale price and the second. “If it’s just a thousand dollars or so, you’re probably seeing the wrong kind of flip,” Blomquist said. A spread of tens of thousands of dollars most likely indicates that a rehab was done. In all five ZIPs, the average spread was $79,000 or more in 2017.

That doesn’t mean there weren’t some grifters playing the system, but Blomquist said the data makes him confident that it’s a far smaller number in Chicago than in cities where it’s still common, such as Memphis, Philadelphia and Oklahoma City.

The biggest spread was in 60620: more than $125,000 on average. That’s gross profit, before subtracting all the costs of the rehab and carrying costs. Attom does not compile those figures and cannot calculate net, post-rehab profits.

The Bolingbrook ZIP code, 60440, is on the east side of the suburb, along I-355 and I-55. Most of the recent flips Crain’s found there were townhouses at the lower end of the price range for Bolingbrook homes.

In 60629, the flippers who picked up a four-bedroom house on Keating Avenue for $70,000 sold it earlier this month for $259,900. Listing photos show the kitchen and two baths were rehabbed, but few other details were provided.

On Sacramento Avenue, also in 60629, buyers paid $220,000 in December for a flat-front bungalow with a rehabbed kitchen and baths and new climate systems. The flippers bought it for about $110,000 in April 2017. The flippers who paid $45,000 for a brick two-flat on Maplewood Avenue put in new kitchens and baths, refinished the floors and made other upgrades (that weren’t spelled out in the listing), and sold it in December for $215,000.

Flipping in large numbers, said Frank Montro, a Keller Williams agent who has represented several flippers, “is changing the landscape of the South Side. It’s a place that you might not have considered desirable, but when you see these houses all redone, you might say, ‘I can live here. I can help build this community back.'”