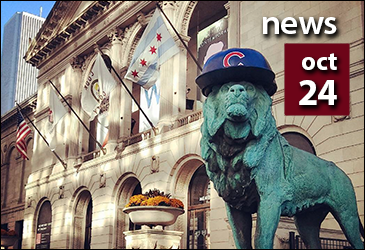 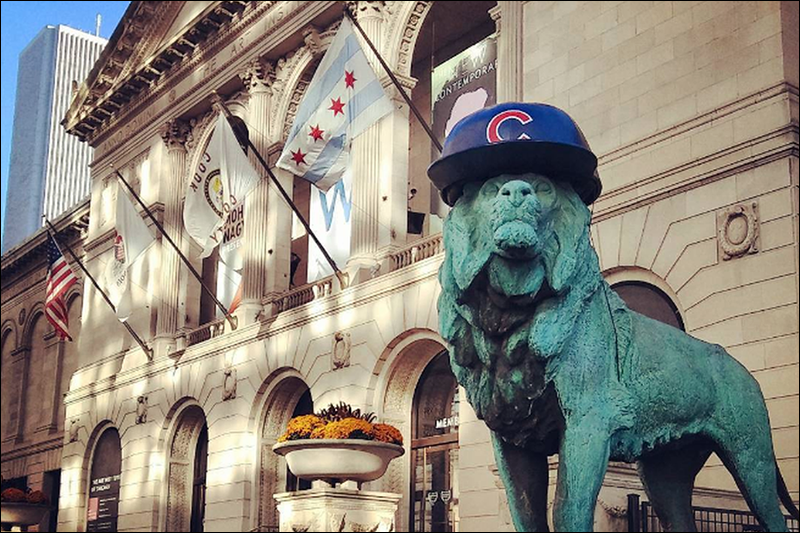 The Chicago Cubs made history on Saturday evening, defeating the venerable Los Angeles Dodgers to advance to the World Series for the first time since 1945—the year that the Second World War concluded. And as expected, tens of thousands of Chicagoans convened around Wrigley Field to watch the Cubs make history. Wrigleyville erupted into a massive celebration Saturday night as Cubs Win flags were seen waving in the air and the crowds chanted the lyrics to the classic “Go Cubs Go.” Here’s a quick look back to the Saturday night crowds around Wrigley Field. A World Series win will no doubt bring similar, if not much bigger celebrations around the Windy City.

The Art Institute of Chicago has dressed up its famous pair of bronze lions for the big World Series run. The lions are fitted with Chicago Cubs baseball caps and the museum is also flying a Cubs Win flag.

The old Marshall Field’s on State Street is sporting a whole row of Cubs Win flags. If all goes according to plan, they will be flying for at least another week.

The UBS Tower at One North Wacker has made a temporary adjustment to its signage to show support for the Chicago Cubs.

The Tribune Tower is getting into the spirit by flying a Cubs Win flag.

Travels passing through Chicago’s Union Station will get a good look at a big Cubs Win flag as they enter the Daniel Burnham-designed building.

The Cubs Win flag can be seen at O’Hare right now as well.

The Blue Cross Blue Shield Building has something to say, and that is “GO CUBS GO.”

And of course, the Friendly Confines proudly displays something that hasn’t been seen on its iconic marquee in decades—the Chicago Cubs are the National League champions.