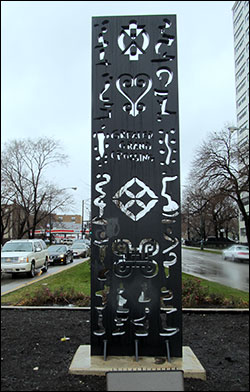 The name “Grand Crossing” comes from an 1853 right-of-way feud between the Lake Shore and Michigan Southern Railway and the Illinois Central Railroad that led to a frog war and a crash that killed 18 people.

Development began after a train accident in 1853 that killed 18 people and injured 40 others. The accident occurred at what is now 75th Street and South Chicago Avenue when Roswell B. Mason, who was to become a Chicago mayor, secretly had intersecting tracks built for the Illinois Central across the rail lines of the Lake Shore & Michigan Southern Railroad. The intersection remained dangerous for many years after the 1853 accident, but industry developed around it as it became required for all trains to make a complete stop there.

Chicago real-estate developer Paul Cornell thought that the area surrounding the intersection, although it was mostly prairie and swampland, would be ideal for suburban development because transportation to Chicago was assured via the railroads. Cornell began buying large tracts of land in 1855. Through the early 1870s he subdivided the area and offered lots for sale. Initially calling the subdivision Cornell, he changed the name to Grand Crossing after learning of an existing village named Cornell.

The early residents were of Irish, English, and Scottish descent and developed railroad settlements in the southeast portion of Greater Grand Crossing, just south of OakwoodsCemetery. Factory workers, farmers, and craft workers of German origin followed in the 1890s, building frame cottages in what was the Brookline section of Greater Grand Crossing.

The CTA Red Line runs through this neighborhood, with a stop at 69th Street.