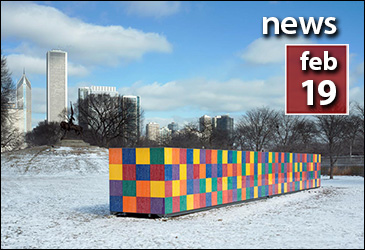 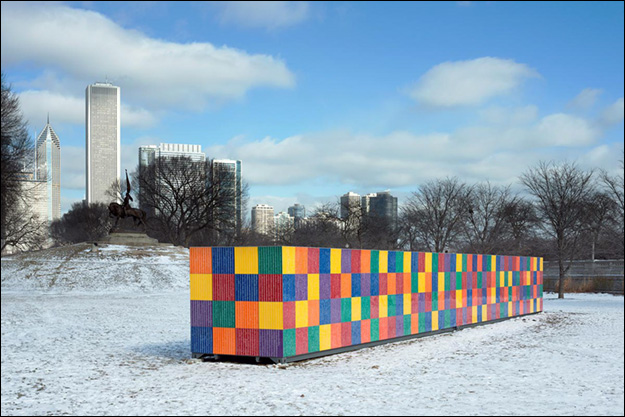 When people visit the Bean in Millennium Park, the first thing they see is themselves. The large, warped bodies and surroundings reflecting off the surface of the sculpture are a significant part of the artwork’s appeal. Tony Tasset’s Artists Monument—which will be unveiled this Saturday, February 20, in Grant Park, in a ceremony presented by the Chicago Park District, the Department of Cultural Affairs and Special Events, and Kavi Gupta Gallery—is also informed by self-absorption. The artist has described the Artists Monument as a “narcissism magnet” because, as he explains, it is made by an artist, about artists, for artists.

Artists Monument debuted at the 2014 Whitney Biennial; instead of being displayed inside the museum in lower Manhattan, Tasset chose to present his work outside, as a public art piece, in Hudson River Park. Red, orange, blue, yellow, green, and purple acrylic panels are assembled seemingly at random on two shipping containers stacked on top of each other, forming a horizontal monolith that measures 80 feet long and eight feet high. The names of 392,485 artists, arranged alphabetically, are etched in white on the panels, and range from relatively unknown figures, such as Max Hein and Ann War, to predictable canonical ones, such as Pablo Picasso and Andy Warhol. (Most of the names were taken from an online database Tasset elects not to identify, a reminder of the data-driven modern world.) By celebrating the creative work of a diverse group of artists, Tasset attempts to flatten any hierarchy that exists among them. This act is in some ways an extension of his role as a professor at the University of Illinois at Chicago, where he has taught for 27 years, specifically with regards to his relationship with artist-students who are just beginning their careers.

In its new location on the southwest side of Grant Park, on Michigan Avenue near Ninth Street, Artists Monument is surrounded by contrasting public sculptures and places them in sharp relief. On one side, a few feet away, is Augustus Saint-Gaudens and Alexander Phimister Proctor’s somber monument to Civil War general John A. Logan. From the south corner, it looks like Logan is riding his horse on top of Tasset’s colorful containers. On the other side is Polish sculptor Magdalena Abakanowicz’s dreary Agora, 106 nine-foot-tall headless torsos made of cast iron. This juxtaposition makes the placement of Artists Monument seem strategic, a rainbow bursting out of dun metal.