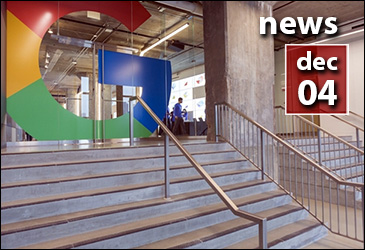 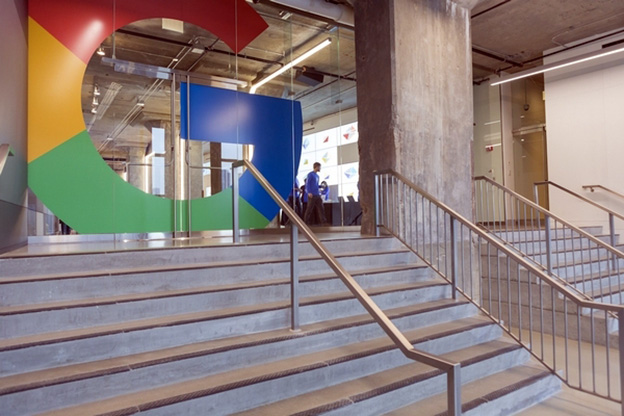 Crain’s toured the new space, sure to be the envy of every desk-anchored worker in the city. Take a peek.

The space radiating with primary colors and is infiltrated with Google logos. It leases more than 300,000 square feet on six floors of the 10-story building, but visitors feel Google’s presence before they even make it to the lobby.

More than 650 people relocated to the new office at 1000 W. Fulton Market, which is now called 1K Fulton, from River North last month. The Googlers are mobile with laptops that can move about the new office, and can take their pick of spaces to work in, be it on a treadmill desk, a bean bag or a swinging chair.

Chicago-based architectural design firm VOA was the interior architect on the project. Each floor is decorated according to a different theme. The sixth floor, for example, is nature focused, so conference rooms are named after Chicago’s parks and large graphics of outdoor Chicago scenes span windows between rooms. Principal Nicholas Luzietti said the employees helped choose the final graphics. “(Google’s) idea was that the (office) in Chicago should be different. It would contain things from Chicago.” This graphic near the sixth floor lobby features app icons as well.

Renovations on the building took more than two years. Developer Sterling Bay transformed it from an old meatpacking freezer to a space overflowing with natural light. Glass windows around the perimeter of the building offer sweeping city views on every side.

Although employees moved in last month, today marked the official opening of the office with a ribbon-cutting ceremony. Mayor Rahm Emanuel and Gov. Bruce Rauner had cameos.

Above, Rauner speaks with a Google employee. The company’s workers wore matching blue shirts today as part of the celebrations.

Emanuel left right after the ribbon cutting and did not take follow-up questions, but Rauner stuck around long enough for reporters to ask him about the Laquan McDonald case. NBC reportedthat Rauner said he cried when watched the dashcam video showing the fatal shooting of the 17-year-old by a Chicago police officer. Rauner did not address recent calls for a U.S. Department of Justice investigation into the Chicago Police Department.

Above, Emanuel, flanked by Rauner and Ald. Walter Burnett, 27th, listen to Jim Lecinski, Google’s vice president of Americas customer solutions, give a speech before the ribbon-cutting.