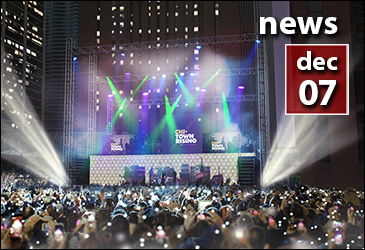 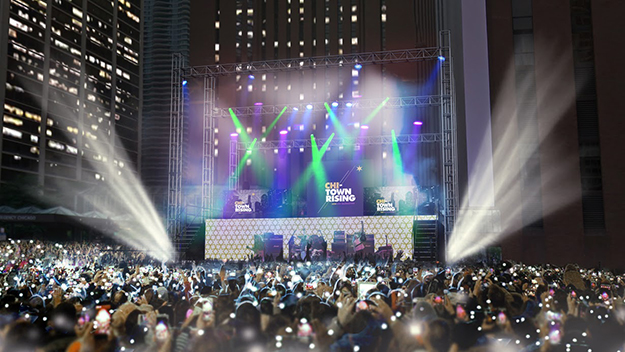 Look out, New York City. Chicago is ringing in 2016 with a big outdoor celebration and a twist on the Times Square countdown and ball drop.

The epic, first-of-its-kind New Year’s Eve event dubbed Chi-Town Rising will feature music headliners, a “visually spectacular countdown to 2016,” and a major fireworks show. The celebration will be televised live on NBC 5.

“We are thrilled to welcome a new tradition to our city, changing the way that Chicago and the Midwest celebrates New Year’s Eve,” John Murray, founder of Arena Partners and Executive Producer of Chi-Town Rising, said in a statement.

The event, presented by Corona Extra and hosted by Hyatt Gold Passport, will be held along the Chicago River between Michigan Avenue and Columbus Drive, with three stages of musical entertainment on the north and south sides of the river and a midnight countdown featuring a giant Chicago star rising into the sky.

As the countdown begins, the star will ascend 36 stories up the Hyatt Regency Chicago’s West Tower, “culminating in iconic imagery and an unprecedented fireworks show.”

“Truly the sky is the limit for Chicago when it comes to celebrating New Year’s Eve,” Murray said. “The ascending star symbolizes our history of meeting challenges head-on and seeing opportunities in every new adventure; it represents our aspirations rising to embrace the New Year. We look forward to this event becoming a new tradition in Chicago.”

The celebration aims to showcase Chicago as a destination for New Year’s Eve and to encourage winter travelers to visit the city.

NBC 5 Chicago will showcase the mega-event live with highlights from the crowd, musical stages, celebrities, fireworks display and the countdown spectacle.

The event, which is privately funded, will be open to the public with some areas reserved for private events and access. Information on ticket sales, a full talent line-up and other details on chi-townrising.com.