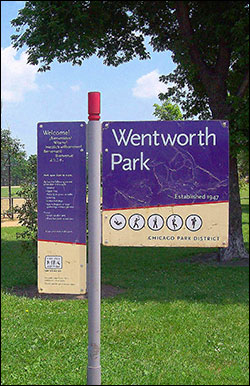 Located 12 Miles Southeast of The Loop.

Garfield Ridge stretches from Pershing Road, just north of the Stevenson Expressway (Interstate 55), to 59th Street from north to south, and from the railroad 1/4 mile east of Cicero Avenue to Harlem Avenue going west, with Archer Avenue as its main artery. Bordering communities include South Lawndale, Archer Heights and West Elsdon to the east and Clearing to the south. To the north are the municipalities of Forest View, Stickney and Cicero, as well as the unincorporated community of Central Stickney, which is located in the “elbow” of Garfield Ridge. To the west is the village of Summit.

The area of Garfield Ridge has always been in an important geographical section of the Chicago area. It contained the southernmost portion of Mud Lake, a swamp which connected the Chicago and Des Plaines River. The southern shore was known as Point of Oaks and extended to 53rd and Oak Park. There are still a few oaks left today. The significance of the lake was that it provided a significant travel route for native Americans and the French explorers Marquette and Joliet. During the wet season one could take a canoe using Mud Lake and effectively connect Lake Michigan to the Illinois River. In drier seasons there were portage routes where canoes could be carried between navigable waterways. Upon this feature a canal was planned and dug in the 1830s and began operation in the 1840s to make the primitive route continuous and efficient. This was named the Illinois and Michigan Canal and was crucial to Chicago’s development as a transportation hub. The first prominent high point along this route which was Summit. There was a dock and maintenance station on the canal in Summit and it led to a small settlement of canal workers in the 1840s near Lawndale Avenue and the current Sanitary and Ship Canal in Summit. Land speculators such as Col William Archer after whom Archer Ave. is named and Frederick Petersdorf began buying land surrounding the settlement. The first prominent resident was former mayor “Long” John Wentworth who was buying up most of the land of the current neighborhood in the 1850s-1860’s as well as much of the land in nearby Clearing and Summit. He owned about 4,700 acres (19 km2) in all. He built a large country estate at 5441 S Harlem in 1868. Upon his death in 1888, he sold his home and immediate farmland to Cyrus Parlin formerly of Maine. The vast majority of the rest of the acreage was controlled by his nephew Moses Wentworth. Moses leased land for the next 24 years to individual farmers, most notably a group of Dutch farmers who settled around Archer and Austin around the late 19th century. They founded two churches. Bethel Reformed on Archer and Austin and Archer Reformed on Archer and Mayfield.

At that time the Illinois and Michigan canal was obsolete and a much larger Sanitary and Ship Canal was built which exists today. Over in the far northeast corner east of Cicero and north of 47th st the Sleepy Hollow subdivision was being built in 1907. At the time the western section of the area was considered part of Summit and the eastern section was known as Archer Limits at some point which then became an alternate term for Garfield Ridge for years. This name was due to Cicero and Archer being the limts of the city at the time and local streetcar service ending there. A significant economic development occurred in 1906-1907 with the opening of Argo Corn Products in Argo near Archer and 63rd street. This created jobs which spurred growth in the nearby communities namely Clearing and Argo/Summit. However, no doubt this would have an effect on people moving to Garfield Ridge in subsequent years. Adding to Argo was the development of the Clearing Industrial District in present day Bedford Park. After 20 years of trying, first by A B Stickney and then by Henry Porter, in 1909 Porter finally got the rail yards and switching tracks up and running. Almost immediately industry sprung up around the yards in Bedford Park which led to a population spike in the area. The combination of this industrial growth and good affordable farmland led developer Frederick Bartlett began to buy land from Wentworth in 1910 and start developing in 1912 sections called the Bartlett highlands. With a first sales office on the corner of Archer and 62nd Ct. (Merrimac). His first development ran from Narragansett to Meade and 51st to 55th street. He continued to develop the rest of the neighborhood and parts of Clearing for the next 10 years in that fashion. These were quite fancy gated communities at the time. In fact, two gate posts exist to this day along Archer and Nordica and Archer and Melvina. At the same time the Southeast section was part of the new village of Clearing in 1912.

The two schools in the area were located at Archer and Central founded in 1892)and Archer and Rutherford. Then in 1915 the area was annexed by Chicago. At this time students travelled to Kelly high school in Brighton Park as they would for more than 40 years. It was at this time that the term Garfield Ridge began to be used. Its name is derived from 55th street being known as Garfield Blvd named after president Garfield and the subtle ridge running between 53rd and 54th streets which separates the swampy Mud Lake area from the drier highlands.In 1918, Polish immigrant Felix Bialon opened his general store at Archer and Meade. This would become Midwest department store and was for a time the only business on Archer in the neighborhood. The 1920s saw substantial Polish immigration to the area around Archer and Lockwood. The Poles attended St Camillus which was at the time a mission church of St Josephs in Summit.

Many immigrants from Poland moved to Garfield Ridge in past years, and since the 1990s many Hispanics have started settling in the neighborhood. This gives the area a unique blend of different cultures. There is generally a large Catholic population. Garfield Ridge also has numerous Chicago parks which include Wentworth, Normandy, Valley Forge, Vittum, and Stars and Stripes.

Garfield Ridge is one of the community areas which border Midway Airport. It is served by the CTA’s Orange Line.