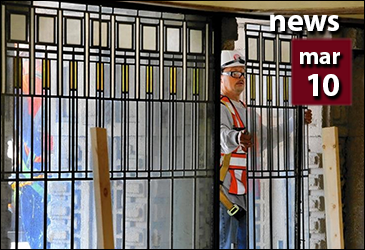 After spending more than $23 million dollars and experiencing two delays, the finish line is finally in sight for the restoration of Frank Lloyd Wright’s Unity Temple in Oak Park, Illinois. Built for a Unitarian Universalist congregation between 1905 and 1908, the poured-in-place concrete structure is considered by many—including Wright himself—to be the architect’s most notable contribution to modern design.

The multi-phase plan to repair the National Historic Landmark and UNESCO World Heritage Site had been in discussion for many years prior to work finally starting in the spring of 2015. Originally expected to be competed by the fall of 2016, the timeline later slipped to March of 2017. According to the Unity Temple Restoration Foundation, the most recent estimate anticipates a public unveiling to take place in July.

The scope of the work involves a multitude of structural improvements such as a full restoration of the building’s exterior including the majority of the temple’s roof. Inside, the structure’s striking original skylights, windows, light fixtures, flooring, plastering, and millwork are also in the process of being painstakingly brought back to their former grandeur. Additionally, workers will modernize the building’s mechanical systems and add air conditioning.

A video describing the restoration process as well as a detailed outline of the three phases can be viewed below:

Phase I: Strengthening the Structure

• Restoration of the concrete walls, chimney, and roof slabs

• Air-conditioning for the warmer summer months

• New over-painting on all existing surfaces to resemble original treatments