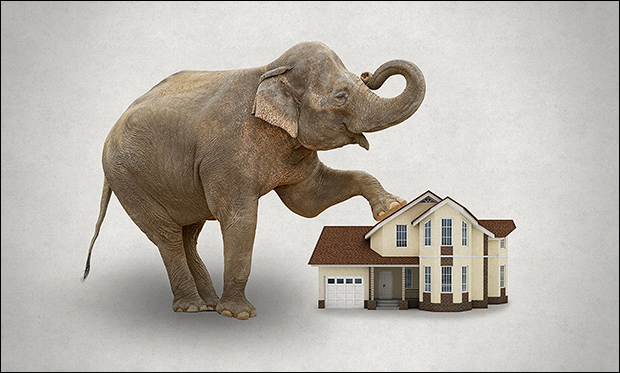 For wealthy homebuyers, mortgages are getting cheaper and easier to come by.

Not only are big-pocketed borrowers paying lower average rates on the high dollar value loans known as jumbo mortgages, but lenders are now requiring even smaller down payments — and, in some cases, they are waiving the mortgage insurance, too.

For months, lenders of jumbo mortgages have been charging interest rates that are lower than what average borrowers pay.

And now some lenders have reduced the required down payments on these loans to as little as 10%, down from 20%, according to Tom Wind, executive vice president of home lending for EverBank.

In some cases, these lenders may not even require jumbo loan borrowers to purchase private mortgage insurance — a prerequisite for almost anyone who takes out a low down payment loan.

Banks have even lowered the credit standards they use to underwrite these jumbo loans, according to John Walsh, owner of lender Total Mortgage Services.

During the past several years, most jumbo borrowers needed at least a 700 credit score to get a loan. But now lenders are giving loans to borrowers with credit scores of as low as 650.

“That was unheard of 12 months ago,” said Walsh.

So why are banks cutting these borrowers such a big break?

According to Malcolm Hollensteiner, head of retail lending for TD Bank, banks want jumbo loan customers not so much for the profits the loans generate, but to win new clients for other bank services such as brokerage services or retirement planning.

Keeping jumbo loans on their books is a very “sticky” way to do that, he said.

For lenders, giving a loan to someone with a lower credit score, or with less money down, is also a gamble worth taking. Big loan borrowers have better track records when it comes to repaying their loans and they default at a much lower rate, said Wind.

Plus, many of the highest priced housing markets, like San Francisco, Los Angeles, New York and Washington D.C., are going strong. And when home prices are stable or rising in an area, it lowers the risk that a borrower will default.

Even if borrowers stop paying, rising home values mean most or all of the loan balances can be recouped in foreclosure.

3 Trends Could Affect These Real Estate Investments
Scroll to top