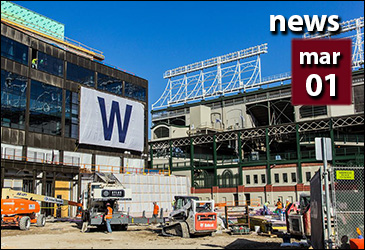 As work continues on the new Cubs Plaza next to the historic Wrigley Field, Cubs chairman Tom Ricketts has offered a clearer vision for how the team plans on using the new space. Yesterday during a luncheon at the City Club Chicago, Ricketts suggested that the team hopes to host events “every day,” DNAinfo reports.

Plans for the plaza at Wrigley Field debuted two years ago, with the team suggesting that they hoped to host up to 25 events annually. However, over the last couple of years, the team has been in negotiations with 44th Ward Alderman Tom Tunney over the types of events the team will host and how many. Alderman Tunney last summer suggested that the Cubs were effectively looking to create the largest beer garden in the Midwest. However, Cubs chairman Tom Ricketts rebuffed the notion saying that the new plaza will be “more than just a beer garden.”

The plaza is expected to host events like farmers markets, outdoor movies, and live music. According to DNAinfo, at yesterday’s City Club event, Ricketts touted the team’s contribution to the city’s coffers, having raised $2 million in amusement taxes for the concerts hosted at the historic stadium last year. Ricketts said that the team expects this number to double for 2017, DNAinfo reports. Ricketts didn’t seem to mince words about the team’s place in Chicago tourism and entertain. “The fact is, we’re a very, very important economic engine to the city of Chicago,” Crain’s reports Ricketts saying during the event.

Wrigleyville residents can expect to see more construction and changes to the area as new development, including new hotels and retail space, continues filling in. And over the years, the Ricketts family has been making quick work of the resistance from rooftop owners by scooping up 11 of the properties. But don’t count on driving to Wrigley later this year—parking rates around the ballpark are set to double.