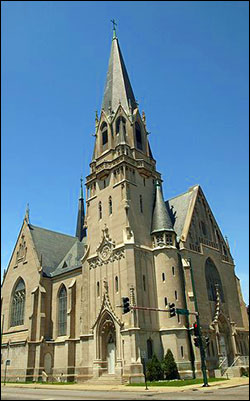 The original inhabitants of what is now Englewood were the Mascouten people. The land was swampy. In 1840, the United States Government Land Office in Chicago officially documented Englewood as habitable land. In the 1850s and 1860s, as Chicago was becoming a city of railroad tracks and economic prosperity, Englewood was just another supporting neighborhood. But in 1871, when the Great Chicago Fire destroyed a large portion of Chicago, residents moved to the outskirts. Englewood’s railroad connections to downtown Chicago made it a convenient location, and the neighborhood’s population grew rapidly. Englewood Station once served many railroad passengers; in 1889, over 1,000 trains would pass through Englewood every day.

Englewood was the home of Dr. H. H. Holmes, one of the first publicized serial murderers in America. His hotel at Wallace and 63rd streets was the scene of most of his crimes and earned it the sobriquet “Murder Castle”.  His story is chronicled in The Torture Doctor by David Franke (1975), Depraved: The Shocking True Story of America’s First Serial Killer by Harold Schechter (1994), The Devil in the White City: Murder, Magic, and Madness at the Fair That Changed America by Erik Larson (2003), and chapter VI, The Monster of Sixty-Third Street”, of Gem of the Prairie: An Informal History of the Chicago Underworld by Herbert Asbury (1940, republished 1986).

The railroad junction at Englewood, where Metra (the former Rock Island) crosses Norfolk Southern (the former Pennsylvania) has long been a cause of delay. In March 2010 a $133 million reconstruction project was announced which will improve operations by replacing the diamond crossing between Metra and NS with an overpass for Metra. The project is expected to be completed in 2014.[5]