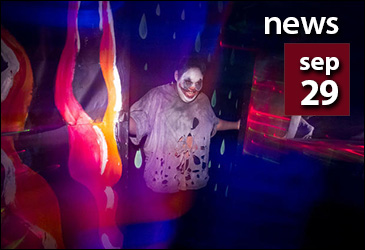 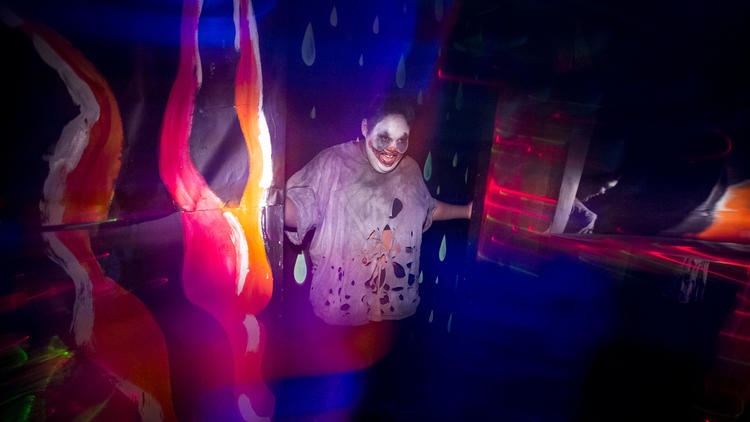 House of Torment: ‘Tis the season to be haunted as Halloween’s host month begins this weekend, and some haunted houses open early for horror and hijinks. The House of Torment returns with two ghastly shows, “Nightmare High” and “The Frenzy,” and don’t even think of bringing the kids. It’s a tall order to alarm job-having, bill-paying adults, but a massive crew with actors, special effects artists and stunt performers work year-round to prepare some theatrical Halloween horror for the “big kids” ages 12 and up. Details: Through Nov. 5, 8240 N. Austin Ave., Morton Grove; $19.99-$32.99; www.houseoftormentchicago.com

Sausages, with a side of art: In conjunction with the West Town Food Truck Social, the West Town Art Walk offers much to feast your eyes upon in case your tongue gets tired. Your eyes and ears will get a workout during the Art Walk portion of the festival, which includes multiple genres — painting, sculpture, tattoos, performance art — as well as live music and a few hands-on opportunities to create your own art. Plus, families can enjoy kid-friendly fun from 1-4 p.m. Saturday in Eckhart Park. Details: 5-8 p.m. Friday, noon to 6 p.m. Saturday, Noble Street between Chicago Avenue and Chestnut Street; free; www.westtownartwalk.com

Skooby Don’t: You’ve seen Scooby Doo and the gang flee from monsters and unmask evildoers who “would’ve gotten away with it, too,” and now, the crew unravels the riddles of modern political correctness. “Skooby Don’t” brings a classic Scooby Doo caper to the stage, taking the gang on an adventure to help Velva’s aunt—who turns out to be Cher—and their search for a culprit leads to a larger exploration of social, political and gender identities along the way. This wild show from Hell in a Handbag Productions also includes Chaz Bono and Kris and Caitlyn Jenner as “guest stars.” Details: Through Nov. 4, Mary’s Attic, 5400 N. Clark St.; $16-$28; www.handbagproductions.org

New sounds, same style: Icelandic experimental rock band Sigur Ros makes immaculate sound—colorful, delicate melodies and fantasy-language vocals that sound like they belong in a glass case. Their live shows in recent years have been equally cultivated, with string and brass sections supporting pristine performances. But on this tour, the group will be taking a different approach: playing unreleased music to live audiences for the first time in years, reworking old favorites into new arrangements and eschewing their orchestra for a typical band unit. It’s a chance to witness the band re-imagine its unconventional sound in front of an audience. Details: 8:30 p.m. Friday, The Chicago Theatre, 175 N. State St.; $69.50-$79.50; www.ticketmaster.com

Taste Talks Chicago: Talking typically prevents you from eating, and vice versa. However, Taste Talks Chicago gives attendees plenty of opportunities to do both, although not at the same time; talking with food in your mouth is still actively discouraged. Otherwise, this food festival doesn’t put many restrictions on attendees’ options, with a massive schedule of events around the city, including a conference, dinner, a party and a barbecue, each featuring some of the city’s best-known chefs and other popular cultural talents. Details: Friday through Sunday, various locations; $99-$495, additional event-specific options; www.chicago.tastetalks.com

Find your happy place: For weekenders torn between the relaxation of staying in and the socialization of going out, food festivals often offer a compromise: live music, low pressure and lots of food and drink. This weekend’s Fulton Market Harvest Fest—curated by Stephanie Izard and Paul Kahan—takes over the West Loop to share and showcase offerings from popular chefs, restaurants and breweries around the city, including El Che Bar, Au Cheval and Girl and the Goat. Cooking demonstrations and musical acts will provide other avenues of entertainment, so you can eat and do what you like, without having to decide too much. Details: 11 a.m. – 9 p.m. Sunday, Fulton Market Street between Peoria Street and Halsted Street; $25; www.fultonmarketharvestfest.com

Characterizing director Peter Berg’s film as a rousing night out, or in, misses the mark. Even with a full share of heroics, it’s a necessarily grim sort of disaster picture. It’s also pretty gripping. The 2010 Deepwater Horizon drilling rig explosion and subsequent, 3 million-barrel oil spill was our country’s worst-ever ecological disaster. The explosions scattered Deepwater Horizon’s employees like rag dolls, hit with a punishing variety of metal and glass. Without turning his character into Superman, actor Mark Wahlberg takes care of business and saves as many lives as he can. Berg sticks to the job at hand, imagining what it was like to be there, and to be the victim of sloppy, deadly safety practices in the name of a good day on Wall Street. PG-13, 1:47, action/adventure

Chris Jones/Theater:  “Man in the Ring”

On March 24, 1962, at Madison Square Garden in New York, welterweight boxer Emile Griffith killed a man in the ring. How guilty was Griffith? That, as the new play by Michael Cristofer about his life makes clear, is an inestimably complicated question. Then there is what happened at the weigh-in, a moment central to what Cristofer is trying to achieve. Seeking an edge and desiring to knock Griffith off his mental game, Benny Paret began to taunt the boxer from St. Croix about his bisexuality. This engrossing production, which is an exceptionally artful piece of Chicago theater, achieves a good deal, including the crafting of an aura of inevitability about all those blows, suggesting that Griffith’s life story, and the inhospitably homophobic era, meant that something was going to explode eventually, even if his aftermath was of a gentle, chastened, ruined man. Details: Through Oct. 16 at Court Theatre, 5535 S. Ellis Ave.; $45-$65 at 773-753-4472 or www.courttheatre.org

Here’s a prestigious first for Chicago — a one-of-a-kind celebration of contemporary classical music, running for six consecutive days in venues across the city and enlisting the talents of more than 300 local musicians and nearly 90 living composers, more than 27 hours of new music. The marathon gets underway Wednesday with concerts by Chicago pianist Patricia Barber and soprano Whitney Morrison (5:30 p.m.), followed by premiere performances by Fulcrum Point New Music Project and the Chicago Youth Symphony Orchestra of works by Elizabeth Ogonek, Alex Mincek, Mischa Zupko, Jonathan Newman and others. The festival continues daily through Oct. 10. Details: Harris Theater for Music and Dance, 205 E. Randolph St.; $5-$25; www.eartaxifestval.com/tickets

Steve Johnson/Museums: “Above and Beyond”

This look at the history of flight and space exploration promises interactivity in a “simulated space elevator” and an avian flight simulator, among other potentially neat tricks. Developers include NASA and the Smithsonian’s National Air and Space Museum. Details: Tuesday-Jan. 8, 2017, Museum of Science and Industry, 5700 S. Lake Shore Drive; timed-entry ticket necessary but included with general admission, www.msichicago.org

1. Get beer-y eyed in Logan Square

Returning to the Logan Square Auditorium for its fourth year, the Logan Square Beer Festival hosts 20 breweries pouring every style of beer, from ciders to cask-conditioned to a number of collaborations, across two sessions. Participants include Off Color, Revolution, Middle Brow, Metropolitan, Half Acre, Lagunitas and more. Among other reasons to go: Pipeworks will pour its Doppel Blud, a new blood-orange red ale brewed with honey, for the first time. $40. 1-4 p.m. or 5-8 p.m. Saturday, Oct. 1 at Logan Square Auditorium, 2539 N. Kedzie Ave., www.logansquarebeerfestival.com

2. Pig out at our favorite fall party

Let’s raise a half shell to Shaw’s Crab House’s Oyster Fest, a lively evening of seafood and live blues bands. Joining the 28th annual event is sister restaurant Oyster Bah, which will serve roasted oysters topped with poached butter and Bad Seed hot sauce. Bourbon and tequila cocktails, plus beer from Founders, will be on offer. $20. 3-10 p.m. Friday, Sept. 30 at Hubbard and Rush streets, www.oysterfestchicago.com

3. Feast and fest in the West Loop

We’re entering autumn, so street fests are numbered. Take advantage of the few remaining nice weekends at the Fulton Market Harvest Fest, organized by chefs Stephanie Izard and Paul Kahan. The two will dish out fare alongside pals from throughout the neighborhood (El Che Bar, Au Cheval, Cemitas Puebla and more). Chefs will also demo dishes, while plenty of drinks will be on hand. Live music from JC Brooks & the Uptown Sound rounds out the family-friendly fest. Pre-sale entry $25 (includes $20 in food and drink tickets). 11 a.m. to 9 p.m. Sunday, Oct. 2 on Fulton Market between Peoria and Halsted streets, www.fultonmarketharvestfest.com/tickets/

4. Hit up a bacon bacchanal

Hordes will descend on Soldier Field this weekend, and not for sportsball: The Bacon and Beer Classic returns to the stadium. During the afternoon or evening session, gorge on candied bacon from Belly Up, bacon sausage from Big Fork, bacon potstickers from Inspiration Kitchens and much more. Battle your meat sweats with beer from Ale Syndicate, 4 Hands and Forbidden Root, among others. $69; $99 VIP. 11 a.m to 3 p.m. or 5-9 p.m. Saturday, Oct. 1 at Soldier Field, 1410 S. Museum Campus Drive, www.baconandbeerclassic.com