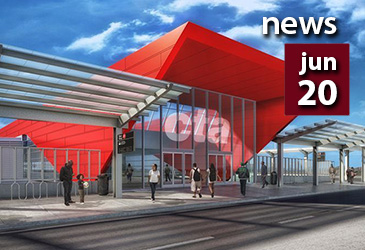 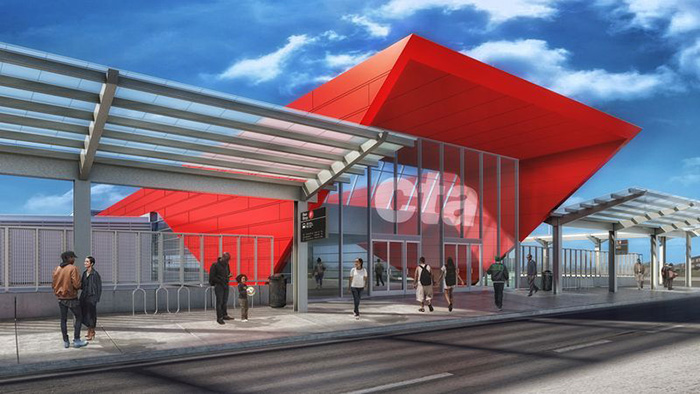 The Chicago Transit Authority has taken the wraps off the final design for its new 95th Street train and bus complex. According to a city release, the $280 million upgrade aims to “create a safer, more-efficient environment for transit riders while creating a signature statement for the South Side. “Currently the busiest stop on the southern arm of the Red Line, the 95th Street facility serves more than 20,000 riders and 1,000-plus connecting CTA and Pace bus trips per typical weekday.

From a design standpoint, the modern terminal is certainly far from bland. Penned by architectural firm exp, the latest renderings represent a slight departure from what was shown in two years ago and now features large swaths of bright red coloring. The choice provides some much needed visual interest to the site while also leaving little doubt as to which CTA rail line the facility serves.

Plans still call for a pair of new terminals straddling the median of the Dan Ryan Expressway flanked on all sides by dedicated bus bays. Designed with year-round, all-weather functionality in mind, the design features canopies over the loading zones plus an enclosed pedestrian walkway between the north and south terminals bridging 95th Street.

With foundation work underway since 2014, the new station will open in phases. The southern wing is expected to be completed in 2017 while the northern terminal — which must replace the current 95th Street station — will commence service in 2018. The new facility is part of larger reinvestment plan in south side transit infrastructure. In addition to rail improvements, the initiative will see the extension of the #26 South Shore Express bus and increased service on the #71 71st Street bus as well as the #34 Michigan and #119 Michigan/119th routes.