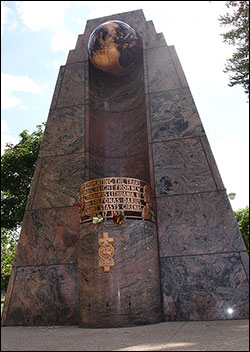 Between 1920 and 1930 the population increased from 14,000 to 47,000. Residents of German and Irish descent began to move into the area from the Back of the Yards and Englewood neighborhoods. Poles, Bohemians, and Lithuanians followed them. Most new residents belonged to various Protestant denominations, but Chicago Lawn also was home to many Roman Catholic churches and schools. Today, there are six Catholic institutions that make up the Marquette Park Catholic Campus Council. Chicago Lawn was a thriving urban neighborhood as the Depression hit the nation and by 1940 its population had reached 49,291. In 1941, the National Biscuit Company announced plans to build a huge bakery in Chicago Lawn. When completed, this was the largest bakery in one location in the world. The size of the facility was doubled in the late 1990s.

The Lithuanian community has maintained a notable presence in the area by establishing a network of institutions that earned their community the label as the Lithuanian Gold Coast. They formed some of the richest savings and loans in the city. The Lithuanian Sisters of Saint Casimir founded Holy Cross Hospital in 1928 and Maria High School in 1952 (originally established as St. Casimir Academy in 1911). The Nativity of the Blessed Virgin Mary Church was established in 1927 on the corner of 69th Street and Washtenaw Avenue. It was founded as a Lithuanian national parish and services are still held in Lithuanian. An Art Deco monument was erected by Chicago’s Lithuanian community in Marquette Park commemorating Lithuanian pilots Stasys Girėnas and Steponas Darius who died in the crash of the Lituanica in 1933.

Chicago’s changing racial demographics had a profound impact on Chicago Lawn. In the 1960s most of the white Americans had fled Englewood and West Englewood and Chicago Lawn became a target for civil rights groups’ open housing marches. In 1966, a march led by Martin Luther King, Jr., into Marquette Park met a violent reaction. King himself was hit by a rock. Violence also erupted in the neighborhood when Gage Park High School attempted to integrate after Brown v. Board of Education. The primary resistance to integration came from fear of declining property values by people who put their life savings into their homes and disruption of ethnic bonds, especially for the Lithuanians. Some Irish, Poles, and Lithuanians still remain, though most have moved further south and west. Many Lithuanians and Poles have reestablished a community in Lemont.