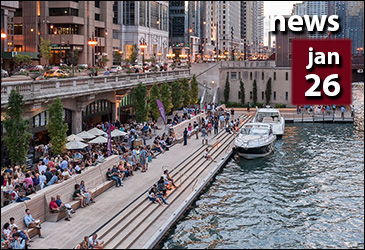 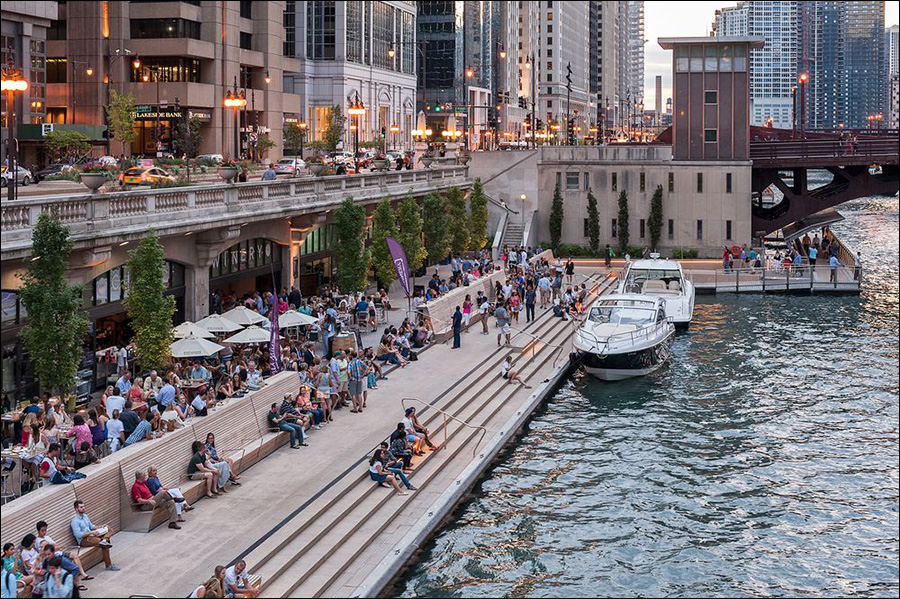 Chicago: Investing in a Second Waterfront

Chicago is often called the city on the lake. But if a spate of projects along the rapidly changing Chicago River continue at their current pace—especially the new centerpiece, the downtown Riverwalk—the city is poised to have a second waterfront that doubles as a new transportation corridor. If Grant Park, a downtown gem, is the city’s front yard, this newly redesigned 1.5-mile section of shoreline on the elbow of the river—a series of “rooms” containing walkways, staircases, theaters, and nature areas—could be its living room.

A collaborative project by Sasaki and Ross Barney Architects, the new civic gathering space gave a river historically known for barge traffic and factories a striking facelift, one of many urban waterfront rehabs across the nation turning shorelines into new downtown thoroughfare. Amenities such as the kayak dock point to the river’s future; the city and organizations such as Great Rivers Chicago have a long-term goal of transforming the city’s rivers, including the Des Plaines and Calumet, into recreational and transportation corridors, with recent projects such as high-design boathouses and the Cal Sag Bike Trail hinting at what changes may come to the city’s 150 miles of riverfront.

Next stop: The mammoth, in-the-works Riverline development in the south loop includes a public river walk; the Lathrop Homes public housing project along the river is being redesigned, while redevelopment near the former A. Finkl & Sons Steel Plant on the northwest side is transforming Goose Island into a tech hub and may include an extension of the 606 bike trail to the river.

Why Chicago’s Thompson Center is worth saving
Scroll to top