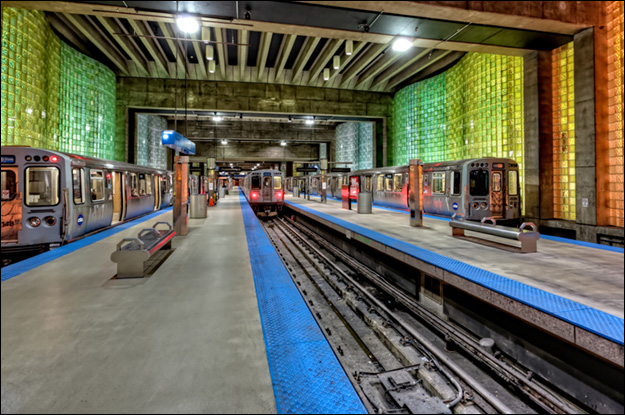 Originally envisioned in the early 1990s as a legacy project by former Mayor Richard M. Daley, the idea of an express high-speed rail service connecting Chicago’s downtown to O’Hare International Airport is being revisited by current Mayor Rahm Emanuel. Although first expressing interest in resurrecting the concept in 2011, the Emanuel administration recently confirmed plans to conduct new feasibility studies over the next 10 months. If all goes to plan the city hopes to put the project out for bidding some time next year. The goal is to cut travel times down to 20 minutes, which is roughly half the time required by a current non-express CTA Blue Line train. With fares estimated to be in the $30-35 price range, the service would be comparable to (if not slightly better than) what taxis and rideshare companies currently charge for such a trip. While major Chicago infrastructure projects are typically subject to budgetary constraints, funding for the new high-speed O’Hare line will reportedly come from private sources.

Though total project cost could end up being billions of dollars, Aviation Commissioner Ginger Evans was bullish on the prospect of private investors — especially from overseas markets — approaching the new O’Hare to downtown high speed connector as an attractive opportunity, according to the Chicago Tribune. While the city hopes for a private entity to operate the system and finance much of its construction, it’s clear that some public funds would be sought at the local or federal level. It’s currently unknown if the project will take advantage of existing rail right-of-ways by operating in tandem with non-express CTA and Metra services or take an entirely separate path. Use of the abandoned Block 37 subterranean CTA superstation has been reportedly ruled out due to technical obstacles, but the city would like to see the downtown station placed in a “high growth” neighborhood such as River North or West Loop. City planners are also entertaining the possibility of constructing at least one additional stop along the high-speed route if it makes economic sense to do so.