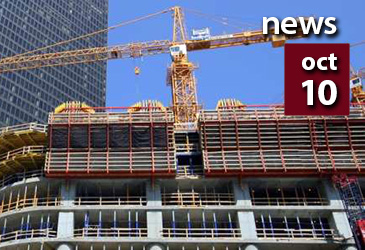 Chicago metro area construction activity has been on the rise so far this year, most notably in the residential sector. The entire statistical area of the Chicago-Naperville-Joliet metro area, which includes Cook, De Kalb, Du Page, Grundy, Jasper, Kane, Kendall, Kenosha, Lake, McHenry, Newton, Porter and Will counties in Indiana, Wisconsin and Illinois, has seen a total growth of 79 percent for residential construction in September on a year-to-date basis, according to a new report.

A recent report by Dodge Data & Analytics shows changes are mostly positive for the Chicago commercial and residential construction market. On a year-to-date basis, the only negative trend was reported within non-residential buildings, which fell 13 percent in September.

As far as residential construction grows, the total growth in the multifamily sector throughout the entire Chicagoland area hit $985,727,000 in August 2016. That figure is due in large part to the start of the Vista Tower during that month, which contributed a value of $780 million, Dodge Data & Analytics noted. In Cook County alone, there was $977,165,000 in total multifamily residential starts in August.

The Wanda Vista Tower includes both hotel and residential units, spanning 93 stories above grade and five stories below. The massive riverfront building will boast 406 luxury condos.

For multifamily starts, Will County saw the second biggest figure of $2.25 million in August. The county saw $31.703 million in single-family home starts.

DuPage County saw the biggest figure in single-family housing starts for August, the report shows. Bringing in $48.509 million for the month for single-family home starts, the county’s figure even surpassed Cook County. DuPage County had $1.25 million in multifamily starts, also.

Chicago and the surrounding area of Cook County saw a total of $45,278,000 in single-family residential starts in August.