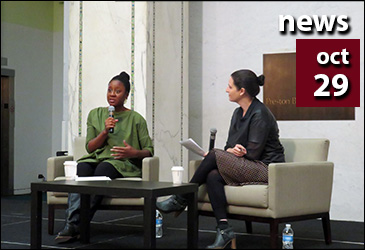 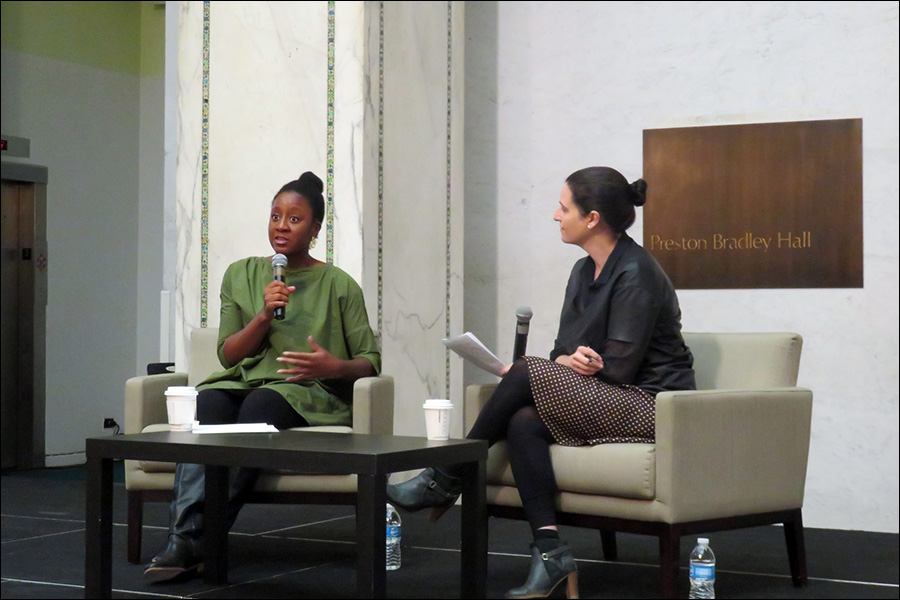 Artistic director Yesomi Umolu and her curatorial team are still in the research phase for the 2019 edition of the Chicago Architecture Biennial, but the ideas and themes taking shape for next year’s program are refreshing and use architecture as a way to examine issues beyond the built world.

“We’re using Chicago as a prism to examine these issues and architecture as a lens to focus in,”

In a conversation at the Chicago Cultural Center on Thursday, Umolu and Sarah Herda, the Director of the Graham Foundation and former Chicago Architecture Biennial artistic director, discussed the key concepts for the upcoming CAB: land and occupation; nature and ecology; memory and monuments; and civic participation.

Although the biennial is still about a year out, and an official theme hasn’t been announced, the team is beginning to concentrate their research initiatives. Umolu and her two co-curators, educator Sepake Angiama and architect/urbanist Paulo Tavares spent the summer together in Chicago investigating the city’s histories, landscapes, and communities.

What emerged from their study so far will be central to the programming in the 2019 edition of CAB. The team is most interested in investigating how Chicago’s spaces, socio-economic conditions, and history has made it what it is today.

In plain terms, that means looking Chicago’s geographic location between the Great Plains and Great Lakes, seeing how its Rust Belt history has shaped the city, and examining the city’s founding on federally appropriated indigenous lands. The team will also consider the Chicago’s political role in civil rights, segregation, and housing movements as well as how waves of migration from Europe, the American South, and Central America impacted development.

“We’re using Chicago as a prism to examine these issues and architecture as a lens to focus in,” Umolu explained.

In addition to Chicago, the curatorial team will also research three other cities they’ve chose to focus on for the program through a series of public talks, workshops, tours, and informal conversations over the next few months.

“We thought about how these core topics might connect to other urban centers around the world, and settled on three locations—Sao Paulo, Johannesburg, and Vancouver which is the red herring we threw in there, we think,” Umolu said.

In Sao Paulo, Brazil the team will explore the housing rights movement and look at how social movements, architects, activists, and indigenous communities use space as advocacy for social justice and civic partnership. They’ll visit Johannesburg, South Africa to see how architecture and memory in contested spaces work in intergenerational communities. In Vancouver, the three curators will focus on indigenous rights, land speculation, housing equity, and architecture as a form of protest.

One thing is clear, Umolu and her team want people to think critically about the space they occupy and how it changes. During her conversation with Herda, she spoke about the idea of an architect. Is it someone who is a master builder, or could it be a social leader with how they transform their space?

Unlike previous biennials, Umolu was eager to begin a dialogue and share the focus of her teams research so that she could be open with practitioners and give faculty the opportunity to shape curriculum around the biennial to prepare students for the programming, Umolu said.

The third edition of the Chicago Architectural Biennial launches on Thursday, September 19, 2019 and run until Sunday, January 5, 2020. Every two years the biennial returns to Chicago with a new artistic director and curatorial team. Artists from around the world are invited to present their work during the biennial which has a main exhibition site downtown at the Chicago Cultural Center but is also anchored at locations throughout the city’s neighborhoods.