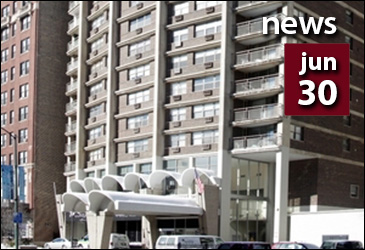 Nearly four decades after being converted to condos, a 30-story high-rise in Lakeview could go rental again.

Bel Harbour, a 207-unit tower just off Lake Shore Drive, has joined the growing number of condominium buildings to flirt with a“deconversion” by seeking offers from developers interested in turning them back into apartments.

Bel Harbour’s condo board has hired the Chicago office of CBRE to market the entire property for sale and aims to have the building’s owners vote on a potential deal by the end of August, said Jerry Nichols, a board member.

Amid a hot rental market, such deals can make financial sense for developers because many condos would be worth more if converted to apartments. But deconversions are notoriously difficult to pull off because state law requires owners of 75 percent of a building’s condos to approve a sale. Owners at the River City condo complex in the South Loop recently rejected an $86 million offer for the property from Chicago developer Marc Realty Capital.

“Have you ever seen 75 percent of anybody in Chicago agree on anything?” Nichols said. “It’s a chance. It’s kind of slim, but there’s a chance it could happen.”

If it happens, Bel Harbour would be one of the biggest deconversions in the city since the trend gained momentum a year or so ago. The board decided to put the building at 420 W. Belmont Ave. up for sale after Golub, a Chicago developer, made an unsolicited offer to pay $45.2 million, or roughly $223,000 a unit, for the property last year, said former Chicago alderman Bernie Hanson, a resident in the building.

Executives at Golub and CBRE did not return calls.

Built in 1967 and converted to apartments in 1979, Bel Harbour is about a block from Belmont Harbor and offers unobstructed views of Lake Michigan and Lincoln Park, according to a CBRE marketing brochure.

“It’s an amazing location,” said Marc Realty Capital Principal David Ruttenberg. “Every multifamily player in Chicago is going to take a look at it.”

Though the high-rise is on the market, that doesn’t mean the board is eager to sell, Nichols said.

“I don’t want people to think that as a board we’re trying to force a sale,” he said. “All we are doing is to try to gather information. . . . We represent all the residents, including those who don’t want to sell.”

With what would have been the largest “deconversion”, 448 condos, at River City’s 800 S. Wells, being defeated, although the defeat being officially verified at a meeting last night with a possible but not probable change, it will be very interesting to see what happens at 420 W. Belmont. Knowing that typically “everyone has a price”, it certainly could be successful. With many differences between the history of the two properties, it will be an interesting watch.
This is a phenomenal trend that speaks well to the rental market.

As a Managing Broker owner of a boutique real estate firm in downtown Chicago, predominantly residential, but a fair share of smaller commercial transactions, we have sold in the 420 W. Belmont and neighboring buildings. The area is a jewel.

We, also as Property Managers of individually owned condo units, and apartment buildings, have seen owner’s return on investment increase annually as rents continue to soar.

Even our higher end $6500 a month, and $4000 a month, rental listings are leasing with multiple offers within a few days of being on the market.

These are very interesting times and continue to show the diverse ways to take advantage and profit from real estate investment including what could be a windfall for owners here.