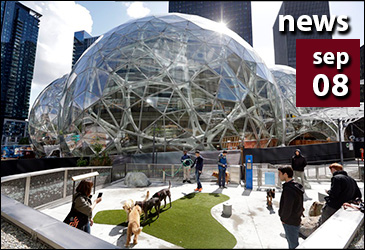 The Wall Street Journal is reporting that Amazon is seeking bids for a second headquarters location that will be equal in size to its current Seattle base. It would ultimately employ 50,000 people in 8 million square feet of office space at an average salary of over $100,000.

This is going to be the feeding frenzy of the century.

This seems to suggest that Amazon thinks it is about capped out in Seattle, which the Seattle Times recently labeled “America’s biggest company town.” The company has over 8 million square feet of office space and accounts for nearly 20 percent of the city’s total office space. The next biggest footprint of any user in any city is Citi, with only about 3.7 million square feet in New York. (Interestingly, Columbus, Ohio is in second place when it comes to being dominated by a single office user; Nationwide Insurance has 16 percent of the total market. It looks like these may be city, not regional totals).

The impact of Amazon on Seattle has been huge. The pressure that Amazon growth has put on things like housing availability and pricing is tough to measure, but surely huge. Amazon appears to have concluded that the city can’t take anymore.
Chicago has been looking for a transformational event, and this could be it.

Seattle is the 15th largest metropolitan area in the U.S., with 3.8 million people. It’s also a highly attractive region with no trouble luring people to move there.  So while Amazon says that it’s open to metro areas of over a million people, realistically, if you want to be as big as Amazon is in Seattle today, you probably need to be in a market as big as Seattle or bigger.

Fifty thousand is a huge number of workers, especially when they are high-skill white-collar ones. Very few cities could easily supply that labor force. Which ones might? Let’s game this out.

Well, the usual coastal suspects can probably swing it. But they have the problem of already having very high costs and hot labor markets for exactly the skills Amazon is seeking—and building restrictions that make growth hard. The Bay Area would be an obvious choice for an HQ, but can it really accommodate one? A better question might be, does it want to? I would suggest similar questions apply to Boston.

Los Angeles/Southern California, New York, and Washington could accommodate an employer that big. Again, high costs are an issue. But especially L.A. and New York are so huge, they can do things other cities can’t. Washington is by its DNA a government town. It’s high-tech, but a lot of that tech is government related.

One intriguing option for Amazon would be New York’s Hudson Yards. Amazon is putting a huge premium on real estate in this RFP, and assuming it wants an urban location, this is one that’s nearly pre-baked. Right now it’s only planned for 6 million square feet of office, with some of that already leased. But I would guess changes could be made and/or other real estate in the area added to the mix. Newark might be a dark horse here.
What, then, are the other cities that could potentially compete? I see four strong contenders: Chicago, Dallas, Philadelphia, and Atlanta. (Houston is very energy focused and dealing with bigger problems right now. Miami and Phoenix are big enough, but could they attract the quantity of tech workers needed?) All of these are large markets with good air service. Chicago and Philly have genuine urban options with genuine urban transit. (I should note: Amazon hasn’t ruled out a suburban location). All of them would surely clear the decks of any obstacles to construction. All of them have much more affordable housing than coastal cities. All have an ability to draw college grads from a large footprint.I would expect these cities to bid aggressively. Dallas and Atlanta really don’t need Amazon, though they would surely want it. For Chicago and Philly, this represents a transformational opportunity.

Rahm Emanuel in Chicago says he’s already had conversations with Bezos. If I were making the choice, Chicago would be at the top of my list. It’s an established urban center that’s a reasonable flight distance from Seattle, with transit, a huge airline, and more. It’s also a slam-dunk draw for every Big Ten school. You can bet that Illinois’s political dysfunction would mysteriously disappear to get a deal done here. One person says Amazon’s staunchly anti-union stance rules out Chicago. We’ll see, but Seattle has strong unions too, and unions are less applicable to a while-collar workforce. Chicago has been looking for a transformational event, and this could be it.Possibly Amazon could also take a chance on scaling some smaller places, like Denver or Minneapolis. I expect everybody to be all over this. And yes, there will be huge government money on the table. Not even the most ardent anti-subsidy person out there is going to take a pass on this.

To me, this is a big test of the thesis that the coasts are capped out, which will force growth into the interior. If Amazon picks a big, established, high-cost coastal center, that will tend to undercut it. We will see.