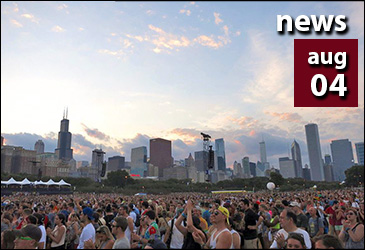 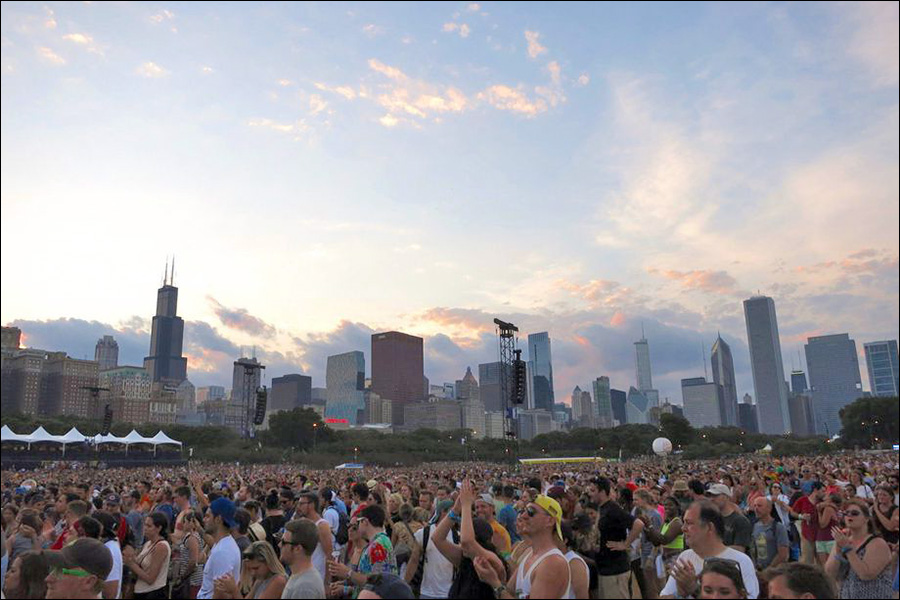 While the thousands of festival-goers flooding Chicago’s Grant Park today for Lollapalooza are there for the musical performances above all else, there’s no denying that a large part of the four-day event’s appeal is the unique venue. Located essentially in downtown Chicago’s front lawn, the musical celebration owes a lot to its backdrop consisting of some of the Windy City’s finest architecture. Like the ever-changing park itself, the manmade glass and steel scenery has also evolved since Lollapalooza began in 1991.

Whether you are a first-time visitor to downtown Chicago or a seasoned local in need of a quick refresher, here are some of the notable skyscrapers that form Lollapalooza’s world class skyline. For this rundown we start with the northeast corner of Grant Park working “stage left,” ending at the southeast quadrant near the Museum Campus. 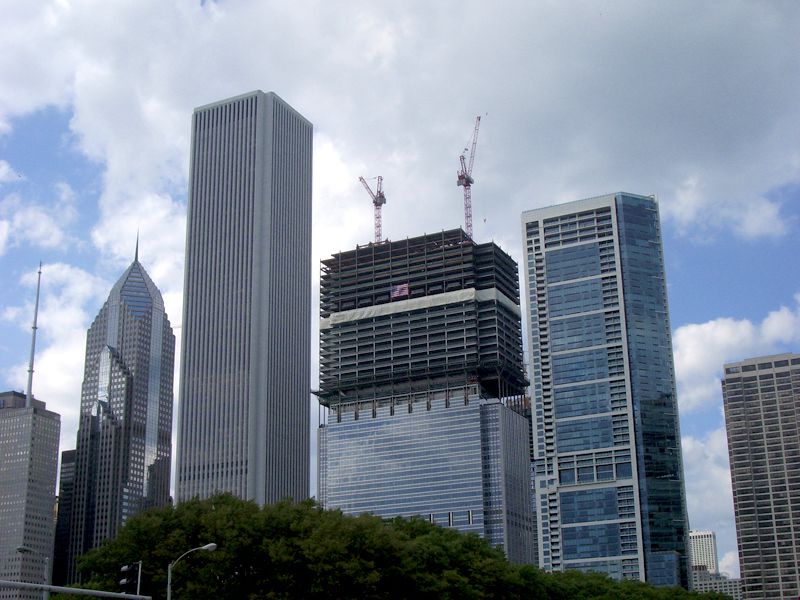 Our tour starts with the Blue Cross Blue Shield Tower. Though the office building currently stands at 57 stories, the building first opened in 1997 rising only 33 floors. A vertical expansion between 2007 and 2010 allowed the insurance company to “grow into” a larger space as needed. The addition also created an impressive double-height sky lobby halfway up the structure.

With the top of the expanded building mirroring its previous crown, it looks as if the BCBS-anchored building could undergo yet another expansion in the future. Despite what your friends may have told you, this is not the case. The tower was designed from the start to rise no higher than its current height of 797 feet. 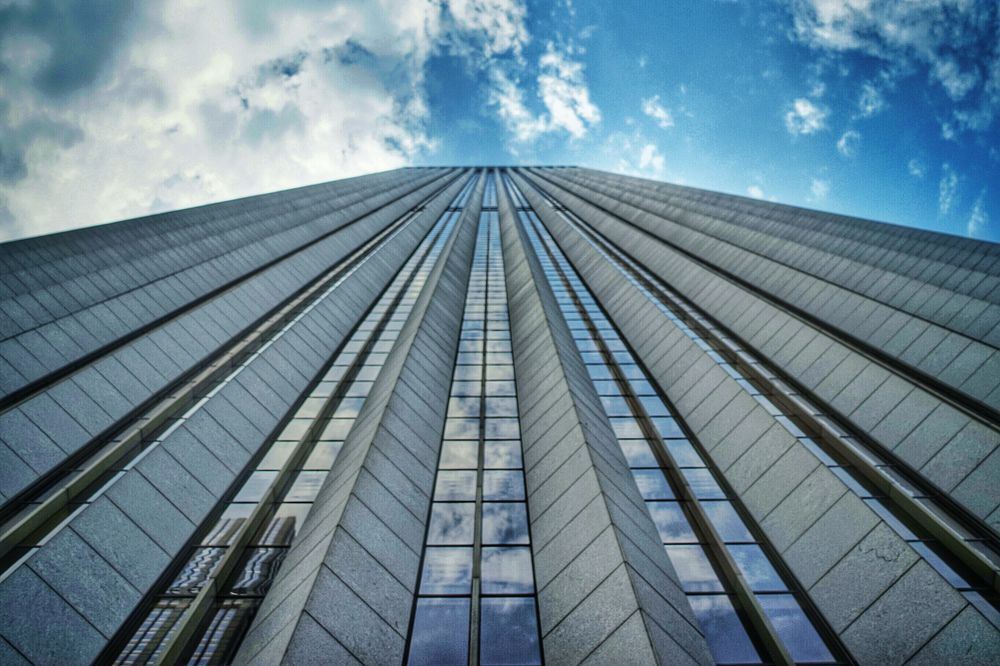 Originally known as the Standard Oil Building or “Big Stan,” Chicago’s third tallest skyscraper was later renamed the Amoco Building and ultimately the Aon Center. Completed in 1973, the monolithic office tower’s white facade has an interesting (and very expensive) story. Initially wrapped in 43,000 thin slabs of Carrara marble from Italy, the building was later re-clad in granite after the marble was deemed structurally unsafe. The job cost an estimated $80 million–well more than half of the tower’s original construction cost. 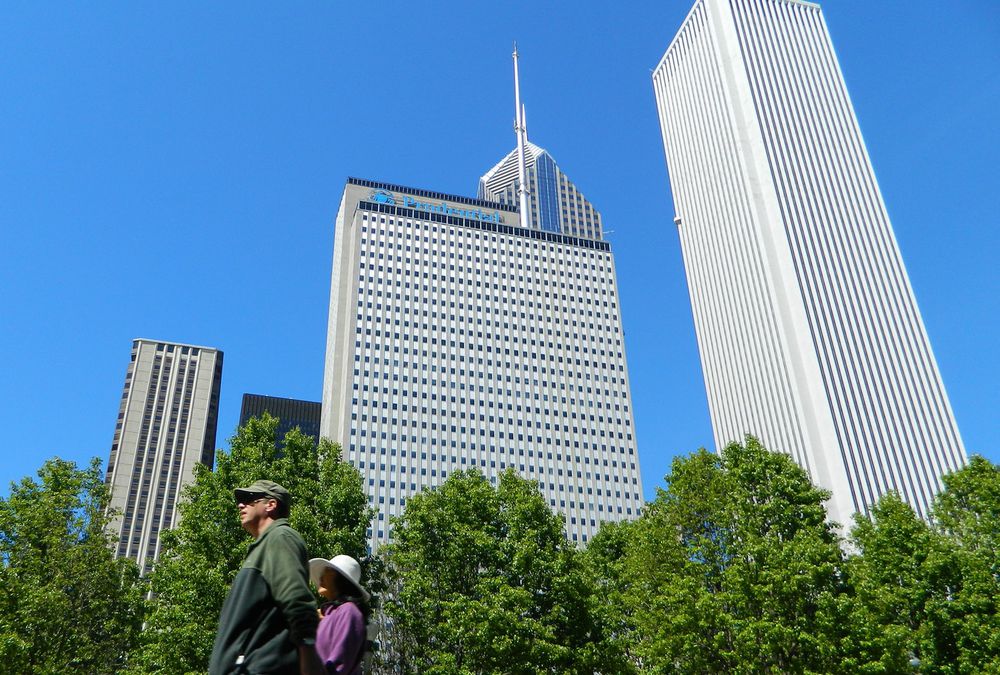 The older of the two skyscrapers that comprise Chicago’s Prudential Plaza, the modern tower now known as One Prudential Plaza sported the Windy City’s highest roof and public observatory when it was completed in 1955. Though later dwarfed by the supertalls of the 1970s, the office building and its brightly-lit broadcast antenna still make an impact from the park. Each of the tower’s 2,617 windows flip in such a manner that both sides can be washed from the inside. 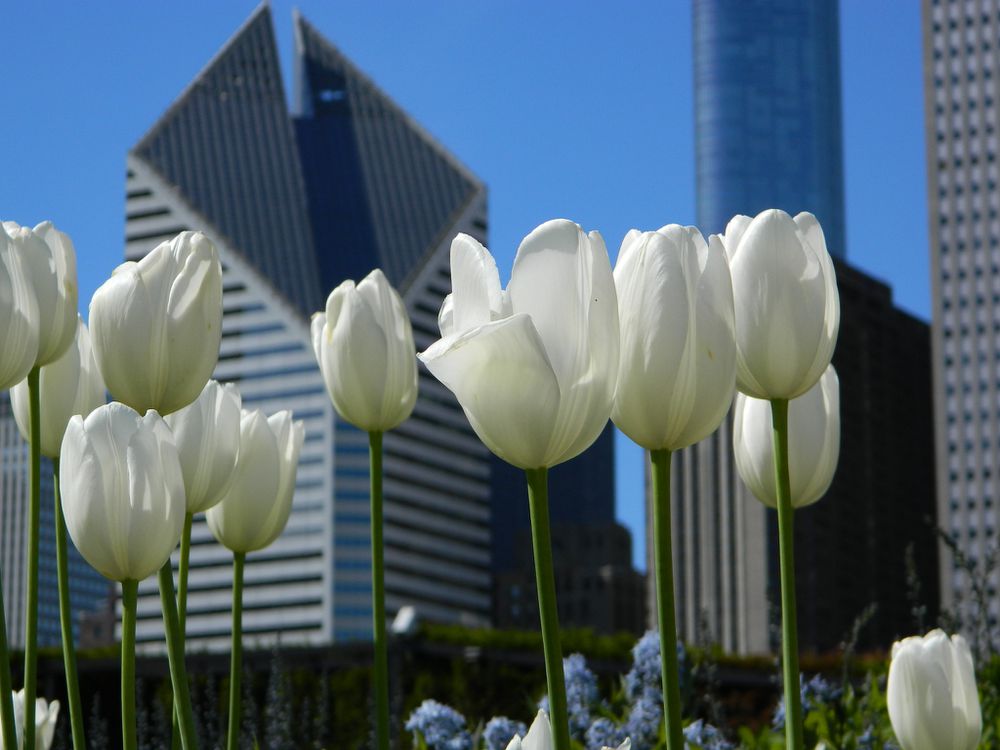 A fixture on the Windy City skyline for 33 years, this tower with its diamond-shaped, angled crown is perhaps best recognized for its prominent role in the 1987 film Adventures in Babysitting. Known by a number of nicknames inspired by its debatable likeness to human anatomy, the tower was dubbed the Associates Center when it first opened. The skyscraper went by the official names of the Stone Container Building and the Smurfit-Stone Building before its most recent rechristening as the Crain Communications Building five years ago. 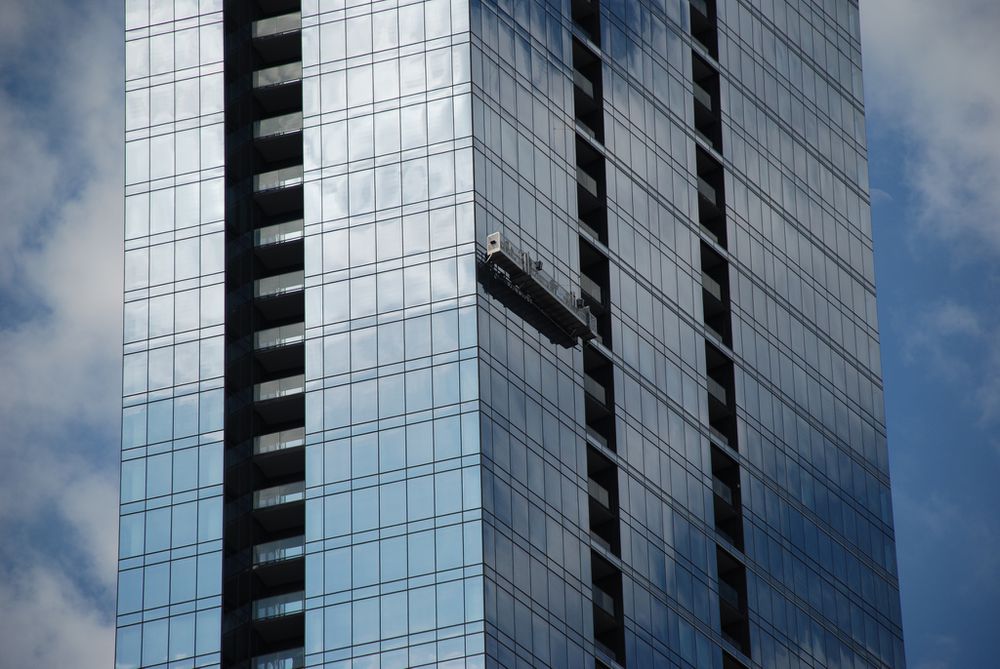 Moving from the north end of Grant Park to its western flank is the tall, blue glass tower known as Legacy at Millennium Park. Built in 2009, the 72-story structure is the tallest residential tower completed in Chicago following the Great Recession (though taller projects are currently on the way). Set back from the lower historic building along Michigan Avenue, Legacy’s reflective facade is particularly pretty from the park during sunset. 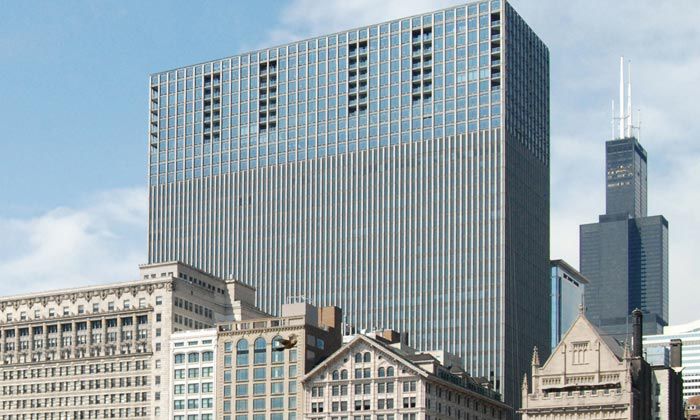 Standing in stark juxtaposition to Legacy’s slenderness is the imposingly wide tower known as Mid-Continental Plaza. Designed by Alfred Shaw and Associates in 1972 as a 50-story office building, Mid-Continental Plaza later changed to mixed-use. Work to convert the top 15 floors of the tower into residential units began in 2007. The process saw the exterior re-clad and new balconies punched into the facade. Architecture aficionados remain divided over the aesthetics of the overhaul. 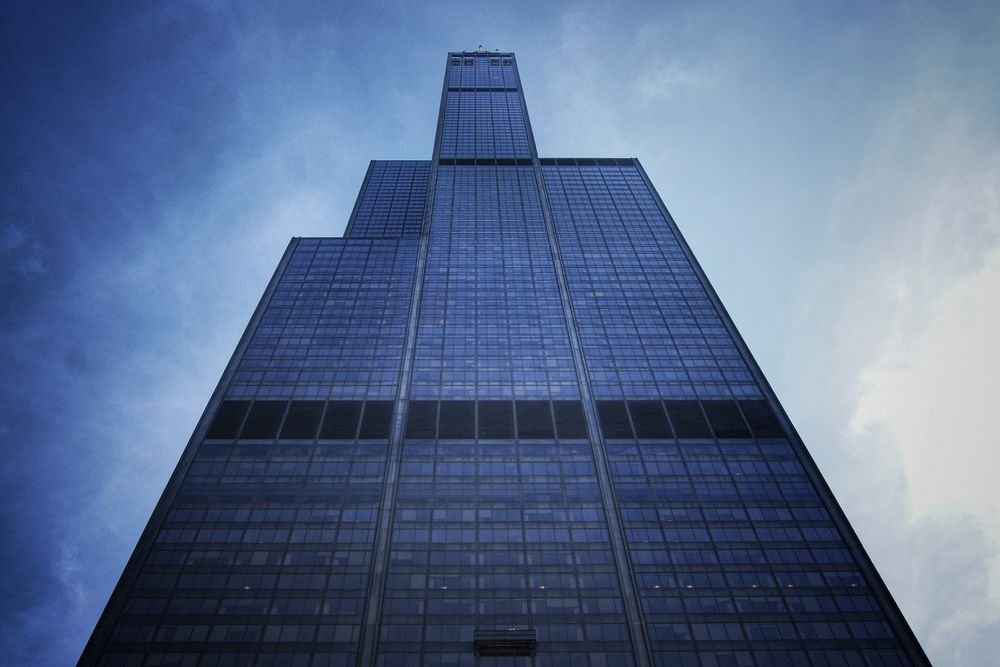 If you want to be correct, this building is known as the Willis Tower. If you want to sound like a local (or perhaps come across as older) it’s “da Sears.” Completed in 1973, the 1,450-foot tower is the undisputed king of the Chicago skyline and held the title of the world’s tallest building for decades.

The tower is currently in the middle of $500 million makeover which will eventually include a new retail and dining complex at its base and an overhaul and expansion of its 103rd-floor observatory. Come back for Lolla 2020 for a chance to rappel down the exterior of the iconic skyscraper. 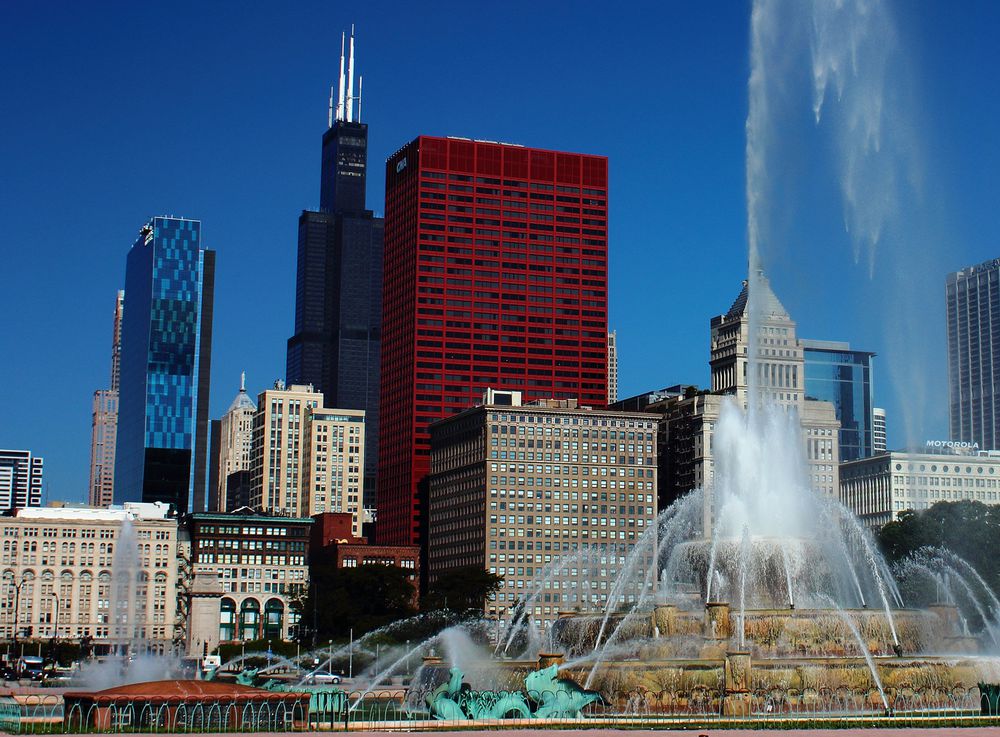 City skylines, like your living room, can benefit from a tasteful pop of color. In the case of Chicago, the colorful accent comes from the 600-foot CNA Center. Named after its anchor tenant but affectionately referred to as “Big Red” by employees, the office tower has brightened up downtown Chicago since 1972. Despite making its home in the tower since its opening, CNA will take its workforce—and naming rights—to a new Loop office tower expected to open at 151 N. Franklin in mid 2018. 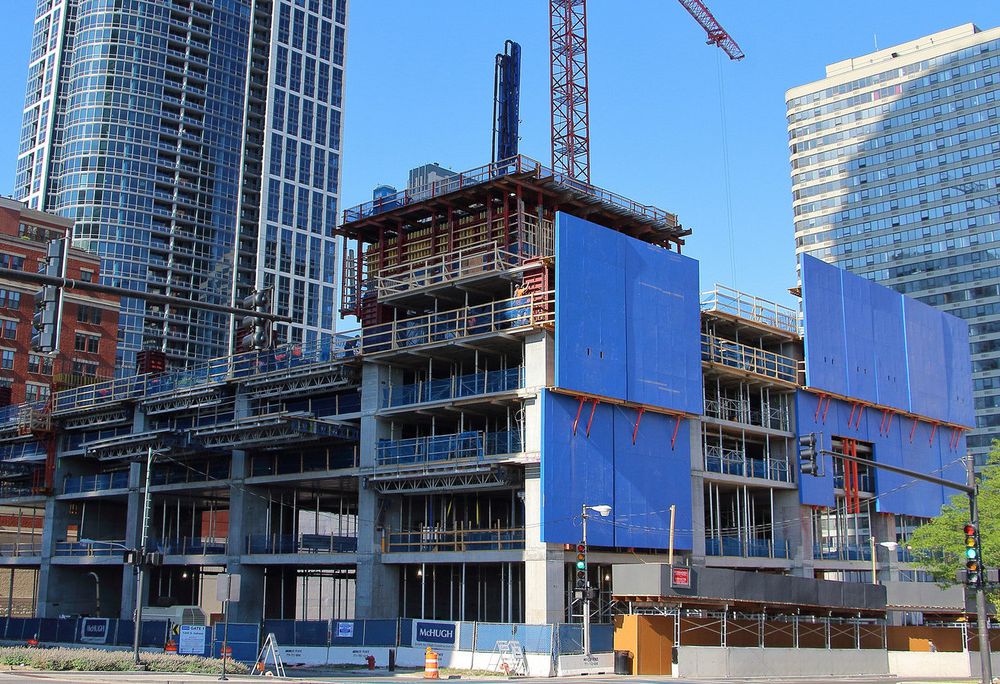 Sweeping around to the south end of the park is a classic Chicago skyscraper still in the making. While the stumpy structure with its bright blue climbing concrete forms might not look like much at the moment, it will eventually become the first of two very tall residential towers that will redefine the southern half of Chicago’s skyline. Known as One Grant Park, the skyscraper will climb 80 stories to its architectural pinnacle. 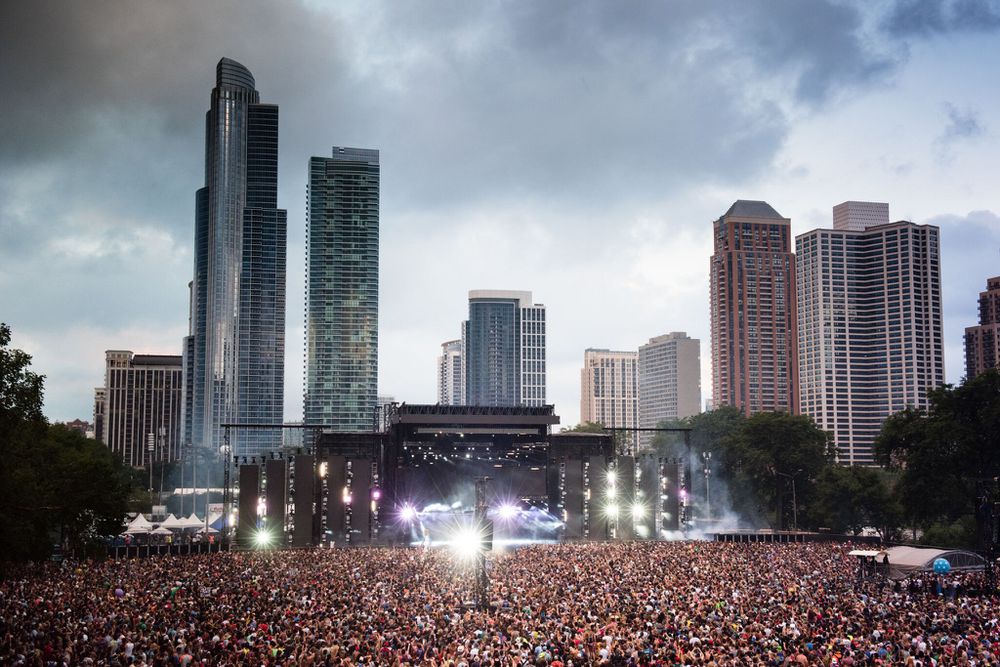 Until One Grant Park and its taller sibling are finished, the south end of the park still belongs to the 726-foot tower known as One Museum Park. Designed by Chicago-based architecture firm Pappageorge Haymes, the 62-story residential building was completed in 2009. Rising just over the shoulder of Lolla’s southern-most stage, the structure makes a dramatic statement with multiple styles of glass and a lipstick-like architectural crown.

Should the Green Line be extended to the future Obama Presidential Center?

Edgewater’s luxury home market is taking off
Scroll to top