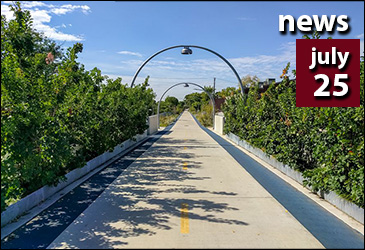 The park district does a lot in Chicago. It runs more than 600 parks but also the beaches, pools, harbors, botanic conservatories, a zoo and a handful of museums. The organization is one of the largest, and oldest park districts in the country.

Throughout the year, organizers bring thousands of events into Chicago neighborhoods. Movie nights, dance performances, concerts, festivals, nature programs, family activities, and recreation are just some of what’s offered year round. If you’re hoping to take better advantage of your park, we’ve put together a list below that covers some of the best programs run by the park district.

These programs are for smaller parks that don’t have fieldhouses or other facilities to host activities or house equipment. ArtSeed brings storytelling and music for kids and Artmobile has art projects like chalk sidewalk murals, wax-resistant drawings, and stained glass window hangings. Rollin’ Rec supplies basketballs, footballs and soccer balls at athletic fields. Wonder Wagon is a trailer that turns into a mobile performance platform and puts on large, colorful puppet shows in the park.

Pianos in the Parks

“I love the idea of surprise music that you just happen upon. To have pianos in a public park is such a beautiful statement on access and opportunity,” Erin Flynn, director of kid’s music programs at the Old Town School of Folk Music to the Chicago Tribune last year.

There are 21 boxing centers in parks across the city that offer free classes for kids ages 8 to 18 years old. Instructors, licensed by the U.S. Amateur Boxing Federation, can help kids train for Golden Gloves and other boxing shows in Chicago. The youth boxing program helped professional boxers and Olympians Michael Bennett, David Diaz, Nate Jones, Leroy Murphy and Montell Griffin get their start.

There are tons of all-level yoga and meditation classes throughout the parks and most of them are free. Some classes take place on the beach, have a Bob Marley theme or are geared towards families. The Garfield Park Conservatory has yoga too and a few classes with goats that visit to graze the grass.

You don’t have to be in the wilderness to get a good look at the night sky. The 606 has a resident astronomer that hosts For the Love of Stars events on the second Friday of each month through December. Look through telescopes set up on the elevated trail to see the stars, constellations, planets and moon.

The Chicago Audobon leads fall migratory bird walks at the North Park Village Nature Center, a 46-acre natural area on the city’s northwest side. Here, you might see deer too and native landscapes like wetlands, tall grasses, prairies and an oak savanna. The Audobon also has bird walks at Jackson Park’s Wooded Island or the Skokie Lagoons. Another haven for migrating birds and their babies is the Montrose Point Bird Sanctuary.

A sound walk is a way to get to know your neighborhood or park better. It’s a chance to take a walk and listen to the gravel underneath your feet, squeaky nearby busses, wind in the trees and birds chirping. Scientists, naturalists, and artists lead walks at Legion Park, Ping Tom Memorial Park and Harrison Park.